Here is a surprise … Despite the overall lack of snow and big storms this winter, this is still only the fifth least snowiest season in my records since 2010. These values are through March 1st of each year: 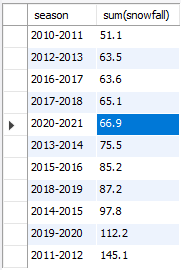 This is where having data and a basic climatology is helpful. My perception has been that this has been a dry and snowless winter, but in reality, there are several other years in my records where there was actually less snow for the season by March 1st.

Here is another fun fact from my weather records.  Does it seem like this winter has been relentlessly cold? In reality, temperatures have been close to average this winter.  Yes, really! What we have not had is the wild swings in temperatures that we normally see most winters, when it is 10 F one day and then 45 or 50 F the next day.   Here is a measure of days above 40 F for each winter from December 1st through March 1st in my records: 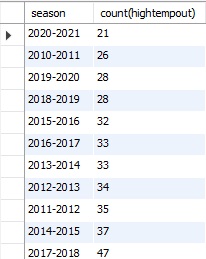 How about low temperatures? Taking a look at the number of days with low temperatures at or below 20 F for December 1st through March 1st again shows this year as having the fewest extremely cold days: 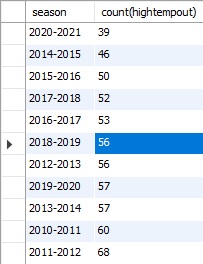 So far, this winter season has had the fewest very warm and very cold days.  It has just had persistent average temperatures, and perhaps the lack of warm breaks has made it feel colder.

Finally, here is a look at the number of days with measurable snow on the ground from November 1st to March 1st: 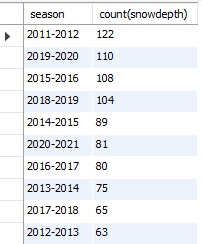 This places this winter season as having the fifth least number of days (81) with measurable snow on ground. With this statistic, remember  that we live on a north-facing wooded slope.  We tend retain snowpack much longer than south facing slopes. 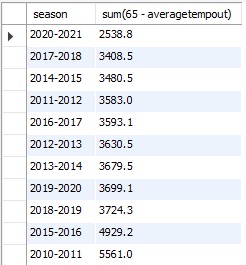 Surprise again! This season has had the fewest heating degree days of any season in my records. This means that this season should have had the least expensive heating bills (assuming cost of electricity or gas remain constant).

So, the 2020-2021 winter season from December 1st to March 1st has had the fewest unseasonably cold and unseasonably mild days. The lack of extreme cold has resulted in fewer heating degree days than any other season in my records. But, the lack of really warm days has somehow made this winter feel chillier than it really has been.