I was lucky enough to be able to work from home on Monday and Tuesday, and this gave me a front row seat for the storm from beginning to end. On Monday morning, as the storm was developing over northern Utah, a cold front came through Northern Colorado, drastically dropping temperatures into the low to mid 20s. Snow began at our house near Nederland around  2 PM gradually increasing in intensity during the afternoon and evening. The heaviest snow fell Monday night and early Tuesday morning with light snow continuing all day Tuesday. By the time all was said and done, we had 23.8 inches of new snow at our house, which is the 5th largest snowfall I have measured in my 10 years of weather records here in Nederland. Here is a list of the top 10 snowfalls since August 2010, the month we moved here:

As is common with these colder upslope snowstorms, the heaviest snow fell east of the Peak to Peak highway and even east of the town of Nederland. There was a very tight gradient of heavy snowfall between areas near and west of the Peak to Peak Highway and areas to the east towards Boulder. For example, the town of Nederland reported 13.5 inches of snow for the storm. We live 4.5 miles east of town, and we had 23.8 inches! That is a difference of 10.3 inches! The radar map from around 5 AM Monday morning clearly shows this band of heavier snowfall over Boulder and the lower Foothills. The town of Nederland is just to the west of this band.  If you drove 4 to 6 miles to east, you were in this band. The heavy snow was that localized: 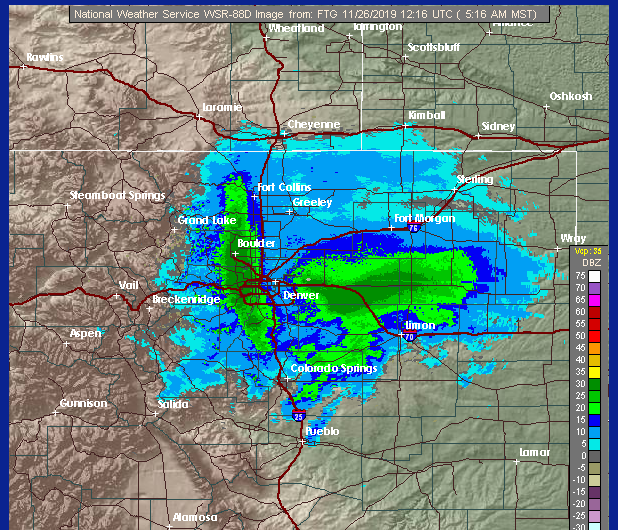 The National Weather Service’s observed snowfall map also shows this area of high snowfall amounts over the eastern Foothills and the adjacent plains: 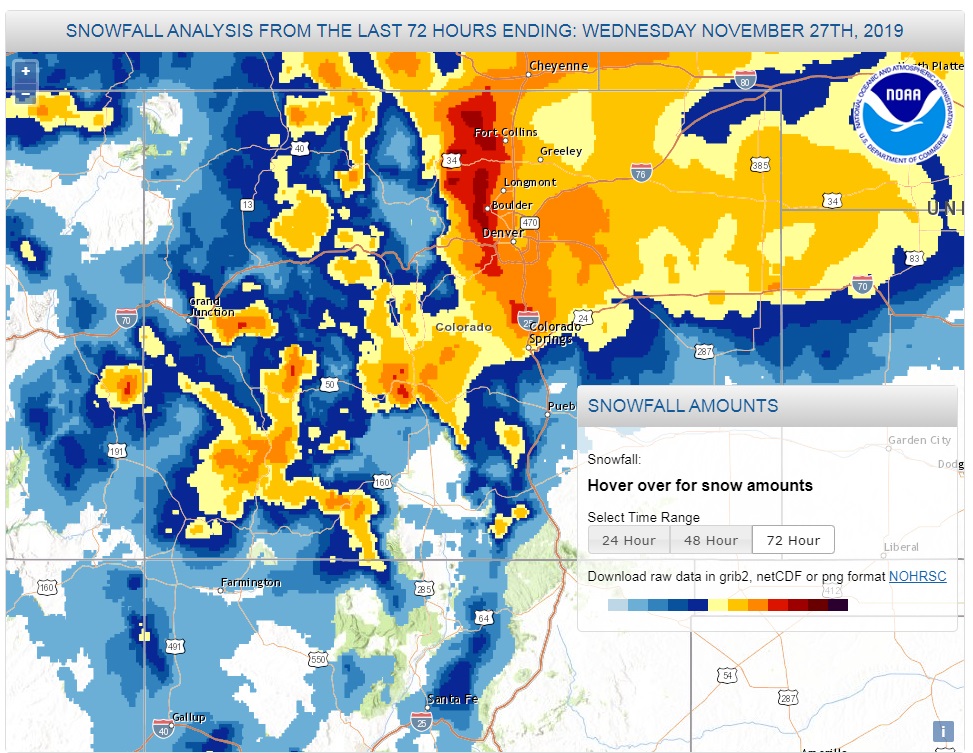 And here is the same map zoomed into Boulder County: 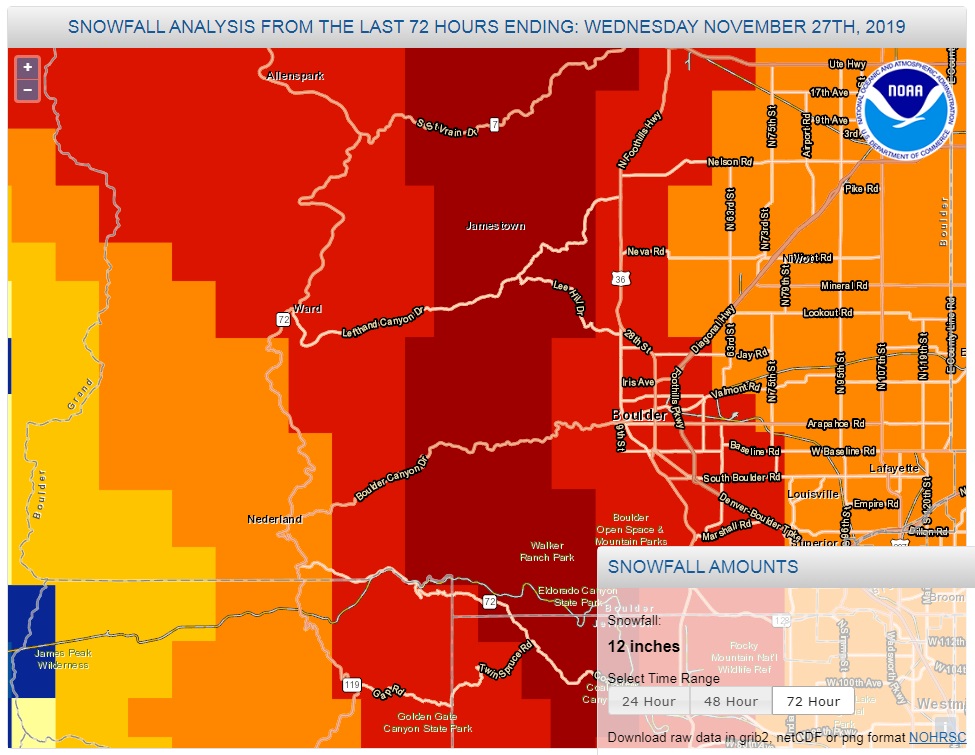 When it comes to upslope snowstorms, it often boils down to where the band of heavier snow sets up in the Foothills. If it is snowing 2-3 inches per hour in this band, and it remains nearly stationary for 2 to 3 hours, you are looking at picking up a quick 4 to 8 inches of new snow.  As expected this was a very light and dry snowfall.  I measure 1.32 inches of liquid equivalent which yields an 18:1 snow ratio. It was also a big storm for Boulder, which reported 22.1 inches with a daily total of 20.7 inches – the third highest on record for Boulder for any month!

Conversely, with the exception of Eldora that reported 9 inches of snow, the ski resorts along the Continental Divide saw very little snow from this storm.  Winter Park only received 2 inches. This was a major bummer for skiers who were looking forward to some fresh snow for the Thanksgiving holiday. A quick look at the Snotels along the Divide shows:

This is by far the biggest fall snowstorm we’ve experienced since moving to Nederland in 2010.  (Again this is meteorological fall which includes the months of September, October, and November not astronomical fall which runs from September 23rd to December 21st.) Our second biggest storm was 12.8 inches way back on October 25-26, 2011. Fall storms of this magnitude have been rare over the past decade.

Thanksgiving day will be sunny and dry in the Front Range Foothills of Northern Colorado. Temperatures are expected to reach into the mid to upper 30s F which should help to melt a little bit of the snow.

Another storm system will swing by to our northwest on Friday and Friday night. I do not expect this to be a big snow maker for us, but I am very concerned with high winds on Friday and Saturday.  If you are heading up into the Indian Peaks to do some skiing or snow shoeing, be prepared for strong and possibly dangerous winds. Wind gusts up around Brainard Lake later Friday into Saturday could be up to 70 mph.

Unsettled Spring Weather to Continue into Early Next Week