The weekend in the Front Range Foothills of Northeastern Colorado was sunny and pleasant. Saturday featured a cloudless blue bird sky, and for the most part the winds were light. I took this picture from our deck on Saturday afternoon. You can see Longs Peak in the distance.  After the gloomy, cold, and snowy weather on Wednesday, Thursday, and Friday, Saturday was a welcome break, and it reminded me why I love Colorado: 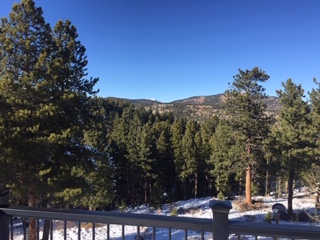 On Sunday, winds were strong and gusty, harbingers of our next storm system.We had wind gusts up to 50 mph, and the winds are still howling as I write this on Sunday evening. Highs on both Saturday and Sunday were in the mid 40s F with lows in the upper 20s to lower 30s F.

The big news of course is the potent winter storm that is taking aim on Northern Colorado and Southern Wyoming. Before I get into the details, I must say that looking at the weather forecast data, this is one of the more interesting storms I’ve seen in some time in that:

If we had a recipe for big snowfalls in the Front Range Foothills, nearly all of the ingredients are there with this storm. However, there are still a few potential wrinkles in this forecast. Nearly all of the models are in agreement on the storm’s track, but the ECMWF continues to be a little less aggressive with the precipitation. As we say in the weather business, there is potential for both boom and bust in this forecast. That is, here in the foothills, we could end up with a heck of a lot of snow, or a more mediocre snow event.  If it sounds like I am waffling, it is because forecasting mountain weather is complicated, and unexpected things can and do happen.

On Sunday evening, the storm system was digging southward into Northern Utah. During the day on Monday this storm system will slowly track to the southeast into Western Colorado. As it does, it is expected to close off, creating a deep area of low pressure in the mid levels of the atmosphere. It will then continue to track eastward across Central Colorado on Tuesday.  Here is the expected storm track. I’ve superimposed it on the active winter weather watches and advisories for Colorado, Wyoming, and Nebraska:

The track with this system is everything. If it tracks 50 miles further to the north, we will likely see lighter snow amounts. If it stays on course or even digs a little further south, we could be measuring the snow in feet here in the foothills.

Here is a map from the National Weather Service (NWS) showing the big area currently under a winter storm warning: 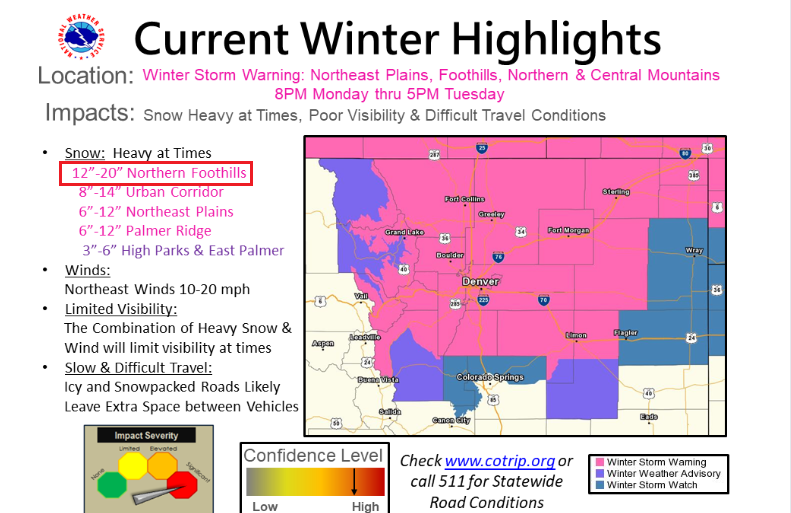 Their forecast for the Northern Foothills (that includes Nederland, Ward, and Estes Park) is 12 to 20 inches. The NWS map of most probable snowfall accumulations shows: 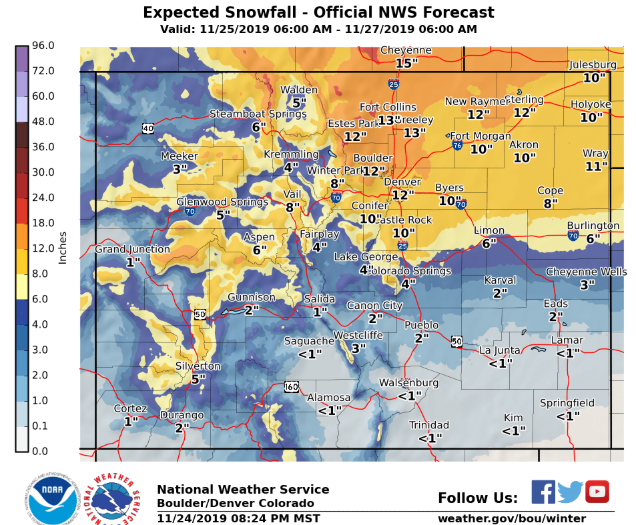 Looking at the various news outlets, the consensus is that 8 to 16 inches of snow are possible in Ned and the surrounding Foothills communities. Weather 5280, who do an excellent job of forecasting weather for Denver and the Urban Corridor, are calling for 1 to 3 feet (yes FEET) in Ned! From everything I have seen, I think 10 to 18 inches is a reasonable forecast.

As I have said before, timing is everything with storm systems, and the timing with this storm could not be much worse. Given the widespread nature of this storm and the fact that it is Thanksgiving week and many people will be traveling by road and by air, major delays and travel headaches are likely across Northern Colorado. If you are unlucky enough to be flying out of DIA on Tuesday, be sure to check the status of your flight. Many airlines are already offering travel waivers in anticipation of flight delays and cancellations due to this storm.

A Tranquil January Weekend in Nederland

Snow Recap and A Look Ahead