High clouds are streaming across the sky over the Colorado Front Range foothills this evening offering the first hint that a dramatic change in the weather is coming soon. High temperatures across the foothills communities soared into the mid 60s F today with plenty of sunshine, truly a spring day in the Rocky Mountains. Since this past weekend, computer models have been struggling to resolve the track of a potent storm system diving into the Central Rockies from the Pacific Northwest. Until about a day ago, it appeared that this storm system would be tracking too far to our north to bring significant impacts to the mountains and adjacent plains of northeastern Colorado. Over the past 24 hours, this relatively benign prognostication has changed as the models are generally tracking the storm system further south.

What does this mean for Nederland, Blackhawk, Rollinsville, and Ward? The current model runs are showing the center of a large upper level storm system tracking over Colorado on Wednesday and Wednesday evening.  As this system approaches Wednesday morning a strong surface low will rapidly intensify over southeastern Colorado and slowly push eastward into Kansas Wednesday night and Thursday morning. Although this storm will not be quite as strong as the blizzard in March, it still has the potential to produce blizzard conditions, particularly east of I-25 and Denver, especially after a strong cold front sags southward across Eastern Colorado.

Rapidly intensifying storms on the eastern plains of Colorado have the potential to make or break the front range foothills when it comes to snow. The blizzard last month exceeded expectations dumping an average of 16 to 18 inches of snow around and just east of Nederland. If tomorrow’s surface low forms close enough to the foothills an hangs out there for several hours, then the northern foothills, those north of I-70, will be in a favorable position to receive plenty of wrap around moisture which would translate into heavy, wet spring snow. If that band of wrap around moisture sets up farther to our east, then accumulations will be much lighter for us, and the winds would likely take on a drying downslope component.

Right now, the model and MOS consensus is that anywhere from 0.50 inches to 1.0 inches of liquid precipitation will fall here in the foothills. That would translate to 5 to 10 inches of snow with a 1:10 inch snow ratio which is about right for this time of the year. The ground and roads are warm after a recent streak of mild weather. After some initial melting, the intensity of the precipitation should overcome this. Trees have not started budding at our elevation but they have on the plains where heavy wet snow combined with very strong winds could result in some spotty power outages.

Here is the most probably snowfall forecast from the National Weather Service: 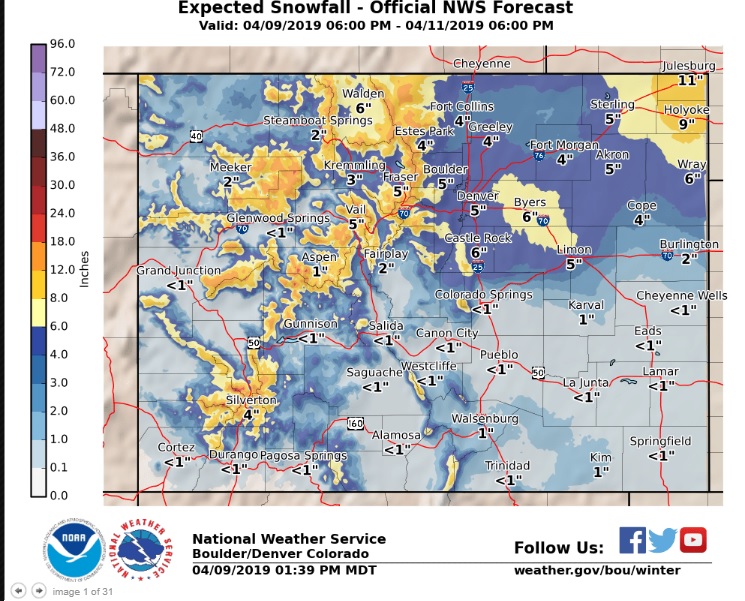 1) Roads will become icy and dicey by Wednesday evening

2) Snow and blowing snow will greatly reduce visibility on roadways, particularly on the plains

If you don’t have to travel Wednesday afternoon or evening, just stay where you are. Spring weather will return by this weekend.