I was patrolling for the Indian Peaks Wilderness Alliance (IPWA) on Friday morning on the Hessie Trail near Eldora, Colorado, when I can across a fire burning in the woods. There is at least 1 to 2 feet of snow on the ground in this area, so when I sat down to put on my ice crampons and noticed a faint plume of smoke wafting from a stand of trees, my first thought was someone was camping in there.  Thinking I would stop by to say, “hello”, I walked across a frozen beaver pond towards the smoke.  When I reached the trees, I was surprised to find not campers but that the logs and duff around the trees were on fire. Yep. This was an actual forest fire. It was small … my first estimate was around 40 square feet, but it was windy and this was whipping up the flames. As a winter patroller, I do carry a radio, and after a little deliberation, I radioed the Nederland Fire Station. In about 15 minutes they were there, and as they started digging around the fire, they discovered it was actually smoldering under the snow! As soon as the smoldering embers were exposed to the air, they burst into flames. It ended up requiring the assistance of Boulder County Fire and the Forest Service fire crews.  Even though it is winter and there is snow on the ground, we can still see fires here in the Front Range Foothills. I find that depressing. Here is a link to a video I took of the fire:

Back to the weather here in Nederland. We have been dry now for some time. We have been stuck in a persistent west to northwesterly flow pattern with limited amounts of Pacific moisture. This has brought some light snow accumulations to locations west of the Continental Divide such as Winter Park, and this has kept the skiing conditions good. But, at least here at our house, we have only had a few flakes of snow blowing over the Continental Divide on strong westerly winds.

As I have said before, this is expected and quite normal in January. In fact, we have not had any dramatic warm ups, which we often do see this time of year. A quick look at my weather database shows that our temperatures have been just about normal. So far this month, our average high has been 34.6 F and our average low has been 17.8 F.  Normal for this month are a high of 35.7 F and a low of 17.9 F.  So far this month, we have only had 1.1 inches of snow! Normal for the month is 13.7 inches.

Are the any chances of snow in our near future? Well, yes, but nothing that appears to be significant. After a pleasant Sunday a storm system will bring a round of clouds and snow showers to Nederland and the surrounding Foothills communities. Accumulations if any will light.  Another storm system could bring another round of snow showers to our area on Wednesday, but again accumulations look light. We seem to be in a pattern where the computer models show some precipitation and then it literally evaporates as the storm approaches.

Here is the the Weather Undergound forecast for Nederland: 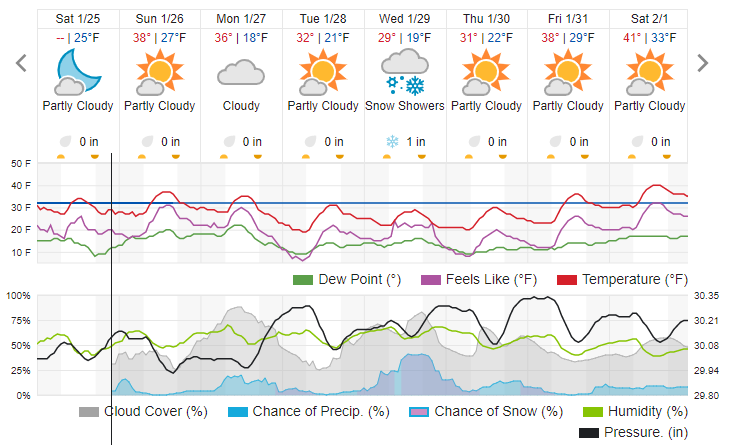 More on Top Snowfalls in Nederland