Rain showers dotted the Front Range Foothills this afternoon as daytime heating and an approaching trough from the Great Basin destabilized the atmosphere. Rain amounts were generally light, but it was a reminder that it is April in Northeastern Colorado, and the weather tends to be unsettled this time of year. Here in Ned, high temperatures reached into the low 50s F after a chilly start in the low 30s F this morning. On the plains, the thermometer reached into the low 70s F before clouds and light precipitation cooled things off.  The upper low to our west this evening will track to our south over Arizona and northern New Mexico over the next 24 hours. This will usher cooler temperatures into Northern Colorado. While the track of the storm is a bit too far south to bring significant precipitation to Nederland, it will bring plenty of clouds and some showers which may mix with snow at times. Any accumulations will be light. This map shows the position of the upper level low midday Wednesday: 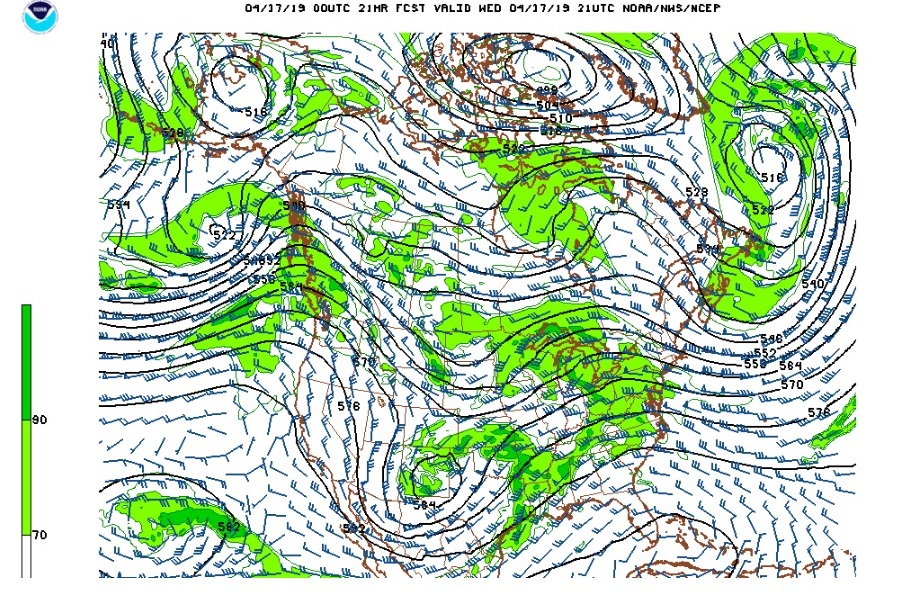 Once this storm system exits to our east and deepens Wednesday night and Thursday a ridge will build across the Central and Southern Rocky Mountains resulting in warming temperatures and drier weather for the end of the week.

The next weather maker to watch arrives on Sunday and continues into Monday. At this time, appears that a stronger cold front will sag southward into Northern Colorado. Behind it, moist upslope flow will develop over the Front Range Foothills. It looks like temperatures will be cold enough for snow in the higher foothills, but it is too early to nail down the details of the forecast at this point. The important point is that Friday and Saturday will offer superb spring weather with daytime temperatures in the 50s and plenty of sunshine. Sunday will be cooler, wetter, and depending on where you are – snowier.