Believe it or not, we are already in the last few days of May. Meteorological summer starts June 1st, and this year astronomical summer begins on Saturday, June 20th. June is typically one of our drier months here in Nederland. We average only 1.04 inches of precipitation, and when this is combined with the higher June temperatures and long days, things dry out fairly quickly around here. Yes, June is one of our nail-biter months in terms of fire danger. 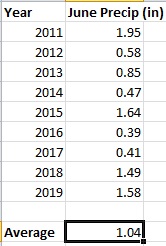 As you head westward in the United States, you tend to find more pronounced seasonal patterns of precipitation. Put another way, many places in the western US have distinct dry and wet seasons. For us in Ned, our driest times of the year are January and June. June is a transition month.  It leads to our wettest months – July and August which are commonly referred to as the monsoon season.   In early June, as temperatures really heat up over the deserts of northern Mexico and the southwestern US, a large ridge of warmer air begins to establish itself over the central and southern Rockies. Initially this leaves us warm and dry here in Colorado. However, lower pressure underneath this ridge begins to draw in moisture from the Pacific Ocean, Gulf of California, and the Gulf of Mexico.  This “monsoonal low” is usually well established by early July, and that is when we begin to see our almost daily cycle of thunderstorms some of which bring considerable amounts of rain.

Another way of looking at this is that as June progresses, our weather is influenced less by disturbances in the jet stream which is much weaker and retreating to Canada. Instead, we have sub tropical moisture which leads to our afternoon and evening thunderstorms.

In the near term, we will be sandwhiched between a deep trough of low pressure off of the West Coast and a trough of low pressure over New England. This leaves us under a ridge of high pressure, and this will keep our temperatures seasonably warm over the next several days.  On Sunday, Monday, and Tuesday, the axis of this ridge will remain to our east over the High Plains. This will allow just enough moisture into the Front Range Mountains and Foothills to fuel some afternoon and evening thunderstorms.  Each day will start off with a blue sky and sunshine, but by about 12 PM the clouds will begin to build with rumbles of thunder and isolated areas of moderate rain.

The ridge retrogrades a bit to the west on Wednesday and Thursday which should dry things out around here. By Friday, the west coast low is expected to weaken and pass to our northwest.  This could result in a more widespread round of showers Friday night.

Here is the Weather Underground Forecast:

An East Side Story