Snow returned to northeastern Colorado on Wednesday afternoon and evening.  For the Front Range Foothills, my 4 to 7 inch forecast was pretty accurate. I measured 5.8 inches of new snow while the town of Nederland reported 4.5 inches. This time, I was able to beat the 2 to 5 inch consensus forecast.  Consistently beating consensus is the mark of a good forecaster. I generally don’t beat consensus, so I have some work to do.

In hindsight, I should have mentioned that the heaviest accumulations with this system would be east of the Peak to Peak Highway.  It is very common for cold upslope storms to produce higher accumulations near Boulder and the eastern/lower Foothills than in Nederland and the Front Range Mountains, particularly if the upslope winds are not that strong.  This west to east gradient of snowfall totals is easily seen in the CoCoRaHs Boulder County snowfall map:

The National Weather Service snowfall analysis for the last 24 hours clearly shows the band of heavier snowfall in the lower Foothills, east of Nederland. This was also an extremely dry snowfall.  With a liquid equivalent of 0.21 inches, my snow ratio was 27:1.  That’s dry! While the nearby SNOTELs in the Indian Peaks did not register a lot of snow on Wednesday night, they have picked up some good snow since the beginning of February.  The Niwot SNOTEL has accumulated nearly 3 inches of liquid equivalent during this time and it closing in on the median snowpack value for this date: 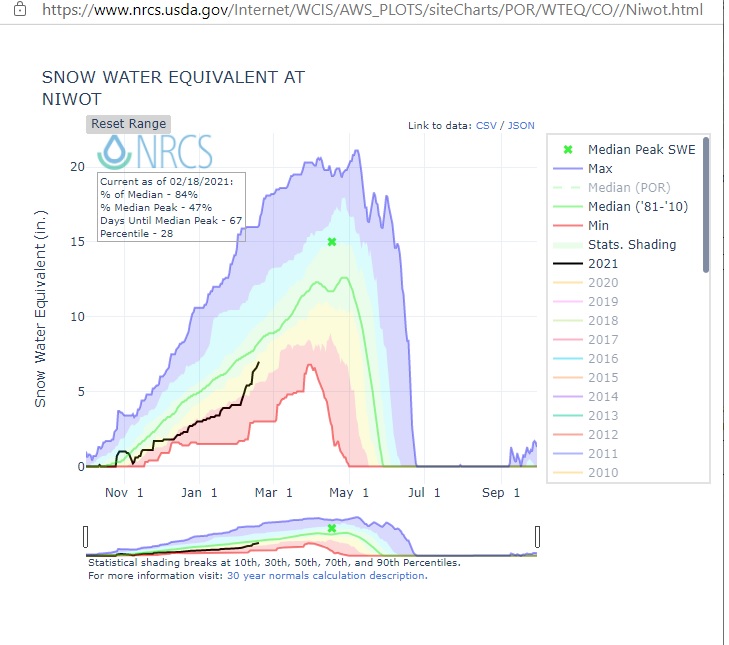 While the snow water equivalent for the South Platte River Basin (the one we live in) is up to 91% of normal: 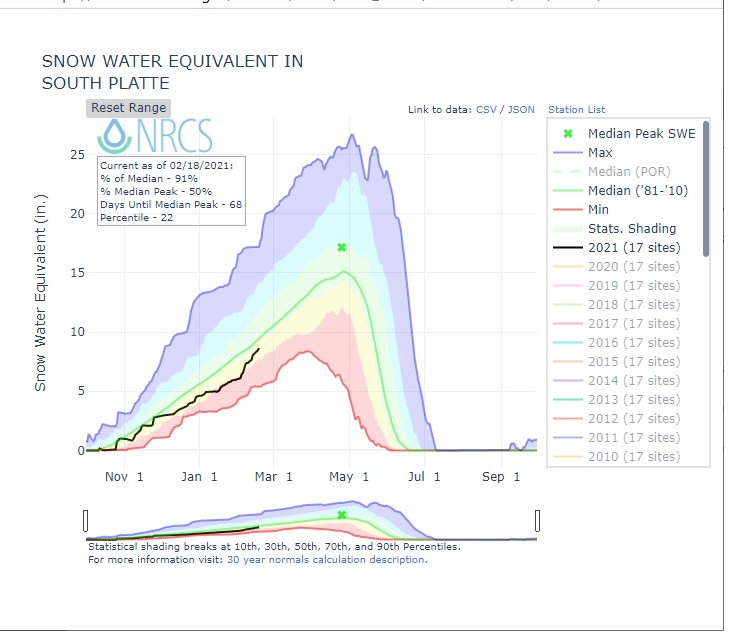 This does not mean, by any means, that the drought is over.  The latest Drought Monitor paints most of western Boulder County in extreme drought (D4).  We are not out of the woods (although I know that we technically live in the woods):

For now, though, things are looking up a bit in terms of the northeastern Colorado snowpack.

The winds will return over the next few days, blowing around this dry powdery snowpack.  High temperatures into the start of the weekend will be in the 25 to 30 F range with lows in the 10-15 F range.

Tranquil and Warm in Ned to Start the Week

Snow in the Air