As with any jet-streak induced snow event here in Northeastern Colorado, there was a good amount of uncertainty as to where the heaviest snow with Friday’s storm would be. But nobody expected portions of Gilpin and Clear Creek Counties to receive any where fro 18-24 inches of snow. And nobody expected the Denver metro area, particularly the western suburbs, to see up to 12 inches. The energy associated with the jet streak combined with copious amounts of tropical Pacific moisture from an atmospheric river originating near Hawaii resulted in a storm that over performed for many parts of the Front Range.  Here is a map of the snow totals from the National Weather Service: 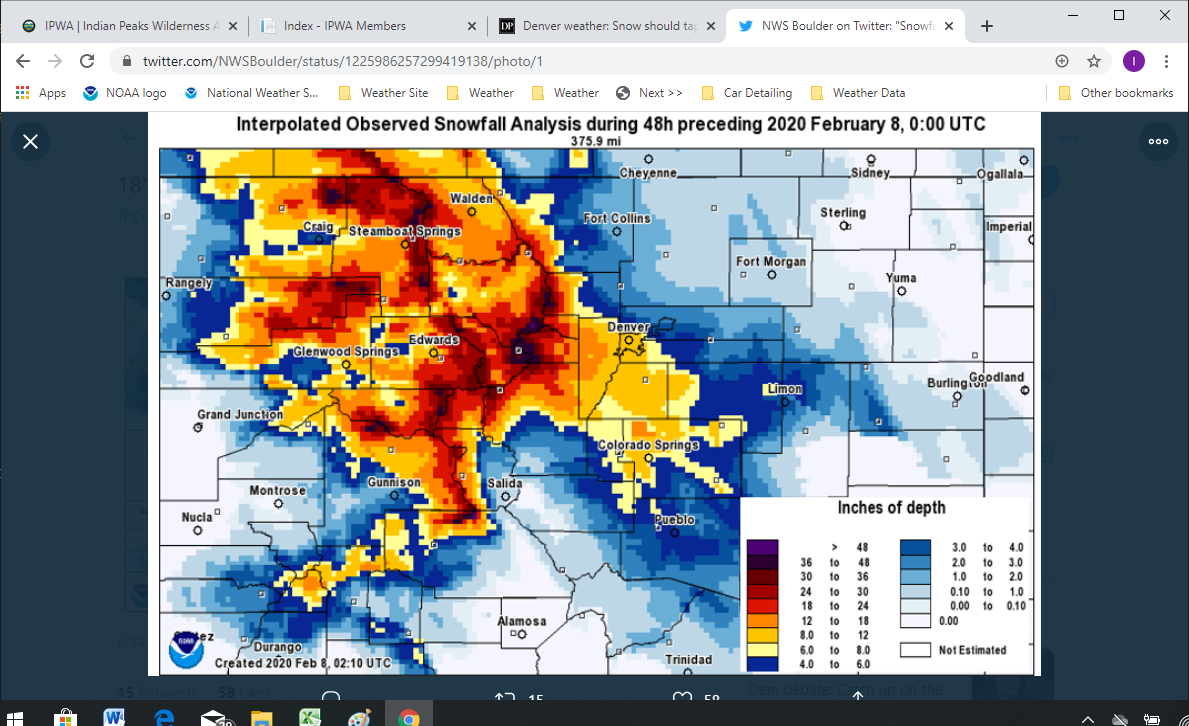 Nederland and much of central and eastern Boulder County were on the edge of the heaviest snow.  I only measured 8.6 inches at our house. One thing that was remarkable about this snow was the moisture content. It was a relatively heavy and wet snow.  My 8.6 inches of snow melted down to 0.74 inches liquid.  This is just shy of a 1:12 liquid water ratio.  This is part of the reason travel was so impacted around our area. My wife and I got up at 5 AM Friday morning and drove over to Winter Park.  The roads, particularly I-70, were about the worst that we could ever remember seeing.  In fact, when we arrived in Winter Park, we learned that westbound I-70 hasd closed all the way from Golden to the Eisenhower Tunnel, and it would remain closed until evening. It took us two and a half hours to get to Winter Park and another two and a half hours to get back home. High water content snow tends to result in more ice and slicker driving conditions. The fact that it was snowing 1 to 2 inches per hour did not help matters.

Remember that precipitation map from the GFS model in my last post?  The heaviest snow was supposed to fall to our north and east. Instead, it fell to our south and west. Isn’t weather forecasting fun?

The SNOTELS in and around the Indian Peaks posted some impressive snow totals. Lake Eldora had nearly 28 inches of snow, University Camp, 16 inches,  and Berthoud Summit, 25 inches.

Temperatures moderated on Saturday into the upper 30s to lower 40s F in the Foothills, but the wind chill associated with the strong and gusty westerly winds made it feel cool. A cold front will sag southward over northern Colorado early Sunday morning and stall close to the I-70 corridor. Upslope winds and increased moisture behind this front will bring a renewed chance of snow to the mountains and Front Range Foothills.  This system is not nearly as strong as Friday’s storm, but there is some weak lift in the middle levels of the atmosphere, and this combined with upslope easterly winds may result in 2 to 4 inches of snow on Sunday followed by another 1 to 3 inches on Monday afternoon. This will keep our snow pack white and minty fresh.  It will also keep area roads a little bit slick at times.

The outlook for the central and southern Rockies is a chilly one. The 6 to 10 day outlook from the Climate Prediction Center has cold air settling into the mountains just in time for Valentines Day and President’s Day Weekend:

And it looks like there will be plenty of moisture around as well:

In short, winter will continue at least for the next few weeks.

Moist End to May