As expected, the second round of snow associated with our double barrel storm system brought another 2 to 4 inches of snow to most locations in northeastern Colorado on Thursday night and Friday morning. The remnants of a weakening storm system in the mid levels of the atmosphere swept across Colorado early Friday morning, and it had just enough energy to produce a period of light to moderate snow in Nederland and the surrounding Foothills communities. Accumulating snow also fell on the plains adjacent to the Foothills, and this wreaked havoc on the morning commute. My drive to work took about two hours.  Whenever it snows on the plains, there is mayhem on the roads and traffic is insane.

In retrospect, the second round of snow came in much later than I thought it would. It was looking like it would start snowing here on Thursday afternoon. There were a few snow showers around at that time, but the bulk of the precipitation held off until later in the night. The timing of precipitation associated with cut-off lows can be tough to nail down because the motion of these systems can be erratic. The first round of snow produced 3.1 inches of snow at our house in Nederland while the second round brought 2.8 inches of snow. 5.9 inches of snow is not a lot by Ned standards, but timing is everything, and the impact on roadways Thursday morning was significant.

A quick look at total snowfall from Wednesday night through Friday morning at a few of the SNOTEL stations near the Continental Divide in Northern Colorado shows about 5 inches at Lake Eldora with about the same at University Camp and Niwot. It looks like the Berthoud Summit Snotel came in with 7 to 8 inches of new snow.

Believe it or not, we are on track for one of the snowiest starts to our fall/winter/spring snow season. We are at 34.9 inches of snow for the season so far. In my 10 years worth of records, only 2018 tops this. By the end of November 2018, we had 39.6 inches of snow:

While the largest snowfall this fall has only been 11.5 inches, we have had many smaller snowfalls and these add up. And, we still have eight days left in November, and more snow is possible early next week.

In the near term, this weekend should feature plenty of sunshine. Highs on Saturday and Sunday should climb into the mid 40s F with lows in the mid 20s F. The upper level sounding on Saturday evening shows strong subsidence (sinking air) all the way up to about 20000 feet. This can be seen by the large spread between the solid temperature line and the dashed dew point line which represents dry sinking air: 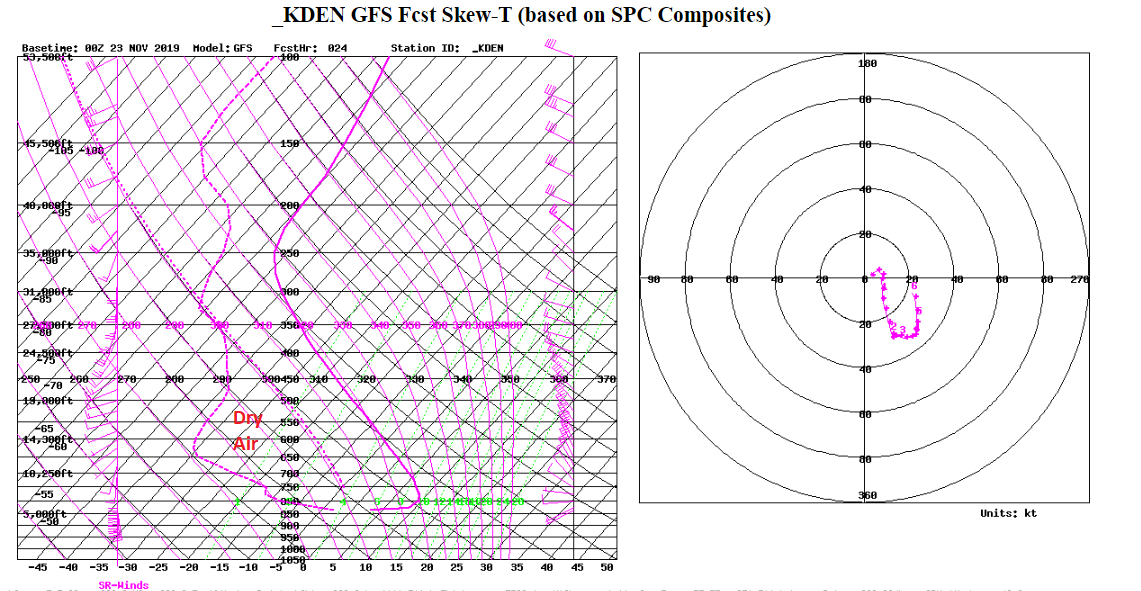 Winds should also be lightening up as the weekend progresses. By Saturday afternoon, we should be seeing plenty of that Colorado blue sky that we all love.

Winds will start to increase Sunday night and Monday as the next weather maker approaches.  Since this system is still a few days out, I’ll talk more about it in my next post. Most of the numerical weather guidance and models are suggesting that we will get another shot of accumulating snow Monday night and Tuesday.  I am not sure about Christmas, but it is sure looking like we will have a white Thanksgiving!

Looking for Snow in Nederland

Is Snow Really in the Forecast for Nederland?