Not much has changed in the forecast over the past 24 hours. The GFS continues to put out a lot of precipitation east of the Continental Divide in northeastern Colorado. In the latest GFS run, QPF ranges from 3 to 6 inches, which would translate to multiple feet of snow. Most forecasters agree that the GFS is overdoing things just a tad, and the general concensus between the models is more like 2 to 3 inches of liquid equivalent in Ned and the Foothills. DarkSky and WeatherUnderground continue to forecast between 2 to 3 feet of snow, primarily  Friday afternoon through Sunday afternoon. The National Weather Service has issued a winter storm watch for 16 to 36 inches of snow. Here is the NWS snowfall forecast map: 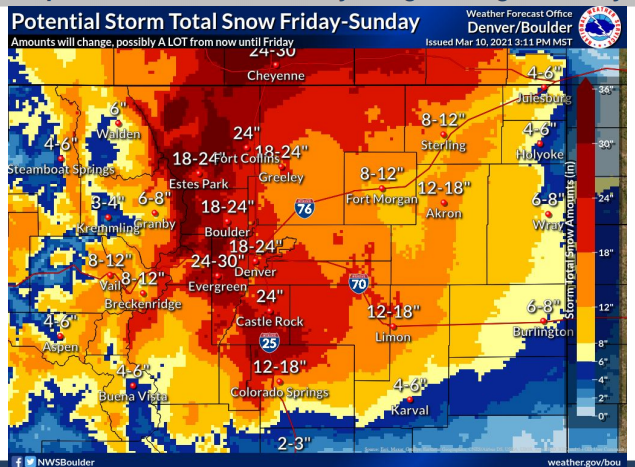 And here is the latest GFS precipitation total map through early Tuesday: 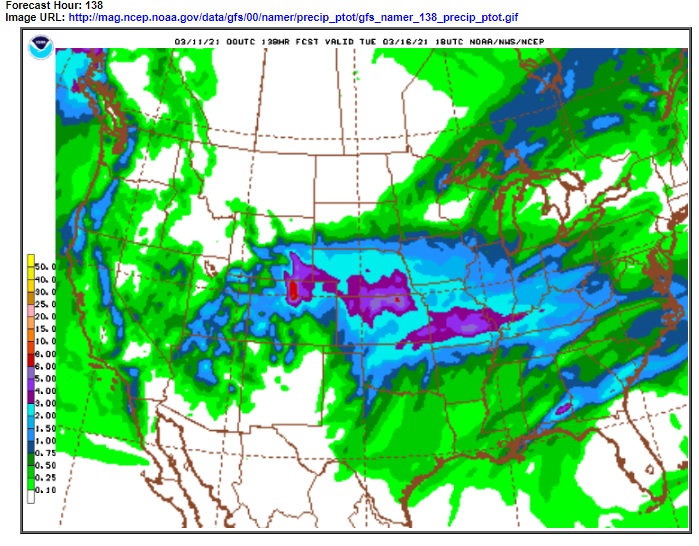 Other notable forecasts include Denver 7 (Mike Nelson and crew) who are calling for 24 to 48 inches in the northern Foothills.

This forecast is by no means a slam dunk:

1) The storm is just now sliding down the California coast, and it has a long way to go and many mountain ranges to cross to get here

2) There has been some concern that the storm track will shift to the north. If this were to happen the heaviest precipitation could shift into Wyoming and Nebraska.

3) The models have been inconsistent with the speed and strength of this upper level low.  Faster storms tend to produce less precipitation.

4) It is not clear what the snow ratios will be. This will be a warmer storm and snow ratios here in the Foothills could be around 12:1.

On the flip side, it looks like we will have nearly 48 hours – a large part of the weekend – of snowfall. A two day precipitation event is rare in the Central Rockies.

This satellite loop shows the storm circulation off of the California coast:

Utlimately, the track and speed of this upper level low will determine how much snow we get. Stay tuned, especially if you have weekend travel plans.

Storm Recap – The Good, the Bad, and the Ugly

A Little More about January, and a Look Ahead