On Saturday at our home about 4 miles east of Nederland, Colorado, we had a high temperature of 57 F and a low of 41 F which is mild for late October here in the Front Range Foothills. There were more clouds than I had originally forecast, and it was breezy. My weather station reported a peak wind gust of 33 mph early in the afternoon. The clouds this morning and afternoon were nearly stationary and positioned in the mid levels of the troposphere (about 20000 ro 25000 feet up) to the east (downwind) side of the Continental Divide. This kept locations such as Nederland under a cloud-filled sky for most of the morning which kept temperatures a little cooler. The hodograph for midday Saturday shows the steadily increasing northwesterly winds with height: 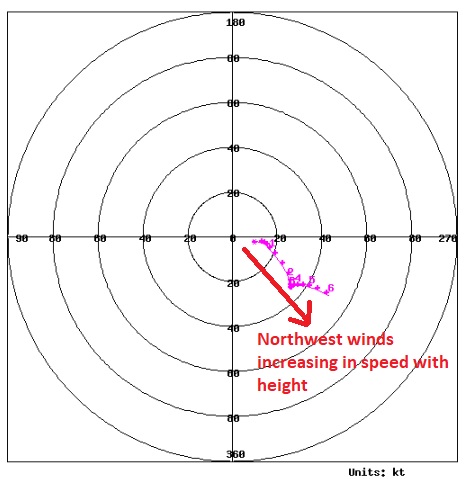 Not much is going to change over the next few days. Northeastern Colorado will remain under a northwesterly windflow regime which will gradually become more westerly on Monday. We will be on the southern edge of the jet stream both days meaning that winds will remain strong in the mid and upper levels of the atmosphere.  A weak cold front will briefly usher in colder air late Saturday night and Sunday morning, but this shallow pool of colder air will struggle to reach the higher Foothills and will be confined mainly to the plains.

A trough of low pressure will dig into the Central Rockies Monday night and Tuesday and propagate to the Central United States on Wednesday where it looks like it will remain through next weekend. I believe that colder air will begin to filter into the Front Range Monday night as Chinook Winds set up on the east side of the Continental Divide. This will act to inhibit any precipitation, but locations on the west side of the Divide, such as Winter Park, will likely see some snowfall.

The 500 mb height anomalies for late next week through next weekend shows the trend of the trough and coldest air setting up over the Central United States. This will leave our region under northwest flow. This tends to be a dry and breezy pattern for locations east of the Continental Divide:

However, as pieces of upper level energy (aka shortwaves) travel around this trough, enough lift and a brief periods of easterly upslope flow can result in some generally light precipitation.

The upshot of this forecast is that colder air will return early next week and likely stick around into early November. I do not see much in the way of snowfall for Nederland and the surrounding Foothills communities through next week.  A few brief periods of light snowfall will be possible, especially later in the week, but significant accumulations do no look likely, at least not at the moment.

Another Round of Moisture will Push Across Northern Colorado this Week