Here is a map of the snowfall from Thursday’s storm: 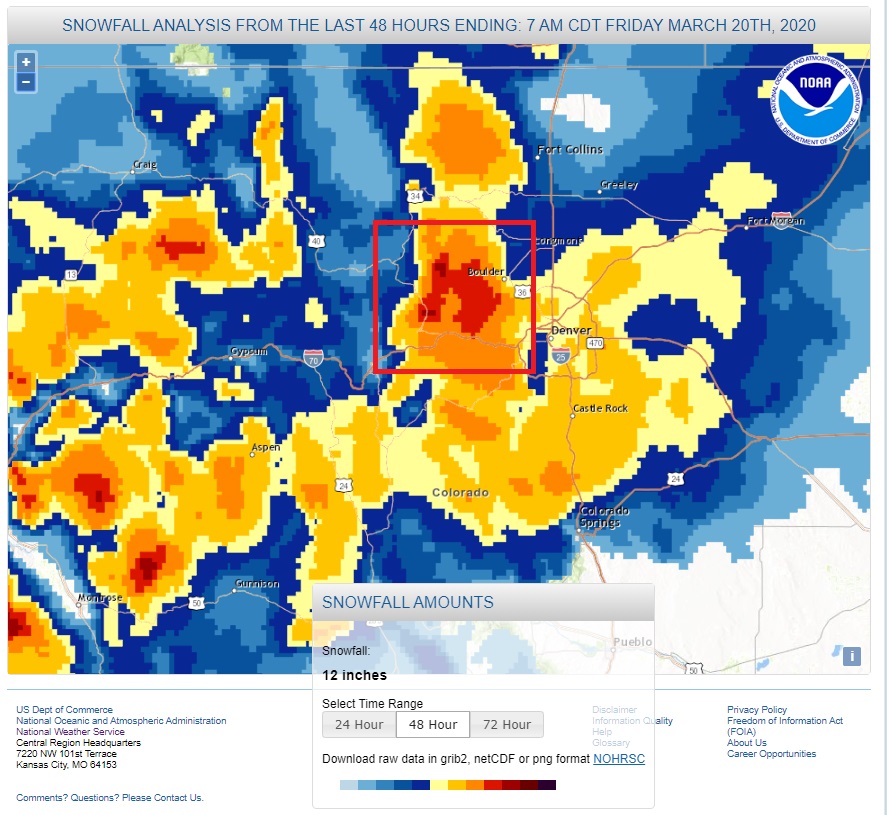 Nederland and the nearby Front Range Communities are outlined in the red box. It is tough to make out the accumulations on this map, but the bulls eye of red we are in represents 18-24 inches of snow, which is well above the forecast of 8 to 14 inches. I measured 21.0 inches.  This was a one day storm, and this is an impressive total for one day. It was also a “wet” snowfall, meaning that it had a high liquid content.  I measured 1.97 inches of liquid, which results in a snow to liquid ratio of about 11 to 1. That is pretty dense snow which you quickly realized when you tried to shovel it. Also, 1.97 inches is the largest one day precipitation amount in my records since we received 2.06 inches of liquid equivalent on May 18, 2017. That was nearly three years ago. This was also the ninth largest snowfall I have measured in the 10 winters we have lived here and the fourth biggest single day snowfall amount. Over this was an impressive storm.

After my last post was I thinking to myself about how much uncertainty there can be with spring storms, especially storms with complicated upper level set ups and plenty of moisture and energy to work with.  We have had our share of low end busted forecasts, but this storm exceeded expectations.

I am now at 135.7 inches of snowfall for this season. Our average seasonal snowfall is around 150 inches, and we still have April and May to go, months which can bring big snow storms.

A Couple of Chilly Nights Here in Ned