As we head into autumn, it is not surprising that the days and nights grow colder. Comfortable September evenings are followed by chilly October nights. By November, temperatures in the Colorado Front Range can plunge well-below freezing, and snowfalls start becoming more frequent, particularly in the Foothills. But where does this cold air come from?  How does it form? The short answer could be, “because it is winter, and winter is cold.”  But it is actually more interesting than that.

First off, as we head into autumn, the nights start getting longer. After the autumnal equinox – which this year is on September 23rd – nights are longer than the days, at least in the Northern Hemisphere where we live. That means the amount sunlight we receive in October is much less than the amount we see in June when the daylight hours are longest. Fewer hours of daylight translate into less heating by the sun and more radiational cooling at night. This yields cooler daytime and nighttime temperatures.

Two important terms are insolation and radiational cooling.  Insolation is the amount of short wave radiation we receive from the sun during the day. Radiational cooling is the amount of long wave radiation lost from the Earth back to space at night.  Insolation warms us up during the day. Radiational cooling cools us down at night.   During the peak of summer, insolation is high because the daylight hours are longer, and the sun is higher in the sky. The summer nights are short, so cooling due to long wave radiation lost to space is less. The net effect is for temperatures to remain warm. In winter, the days are shorter. The nights in winter are much longer. With shorter daylight hours and a lower sun in the sky, insolation is reduced. The net effect of this is to lose more radiation to space than we receive from the sun and this helps to lower temperatures.  Another way of looking at this is that the balance of incoming solar radiation and loss of heat energy back to space influences our daytime and nighttime temperatures.

This diagram shows some of these radiative processes: 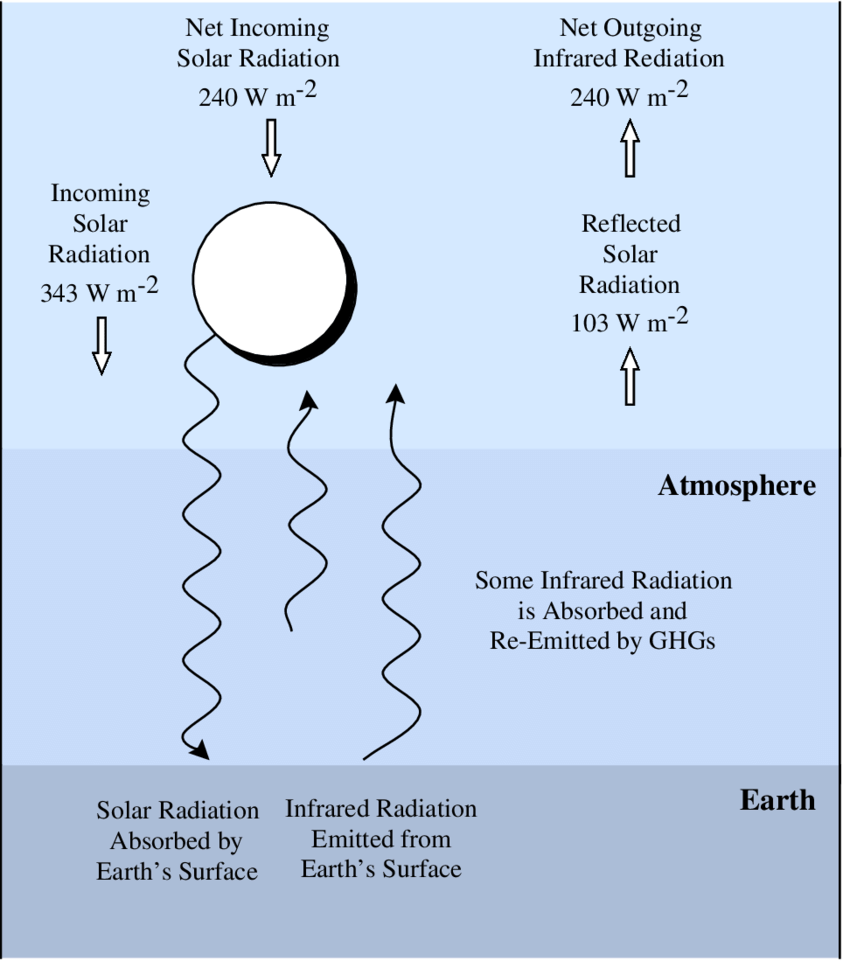 At this point, you are probably thinking that this is “yawns-ville”.  Who cares about this, right?

Well, the physics behind radiative transfer between the sun, the Earth, and its atmosphere are one of the fundamental things that drive our weather. When you study Meteorology in school, you learn about this before you learn about large scale atmospheric circulations and weather forecasting.

Consider this.  After September 23rd, the north pole is plunged in darkness until mid March. By the winter solstice, all locations north of 66 degrees 32 minutes north do not see any daylight. Because there is little to no solar insolation north of the Arctic Circle for nearly 6 months of the year, a lot of energy is lost to space and the air becomes very cold. This is where much of our cold air comes from here in Colorado in the winter. Cold air masses from the Siberian Plateau and the Arctic pour southward into the United States, resulting in those famous “arctic” cold outbreaks which can freeze pipes and drive up energy bills. 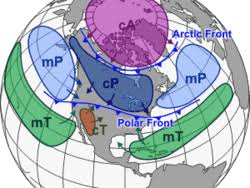 The diagram above shows where these Arctic (the purple area labelled cA) and polar (the dark blue area labelled cP) airmasses form and push southward to create our winter weather here in Colorado.

We can also see cold air masses which originate from the northern Pacific Ocean. But since the ocean is warmer than the land in winter, these air masses tend to not be as cold as their arctic counterparts. Their temperature is modified by the ocean surface and are hence labelled “mP’.

Over the next 30 days, we will start to see colder air piling up across the arctic, northern Canada, and northern Russia.  This colder air will begin to slide southward towards the United States bringing us our first real taste of winter by mid to late October.

There are other factors which influence the formation and movement of cold air masses. These include the fact that the Earth’s axis is tilted 23.5 degrees and the Earth spins, completing a rotation once every 24 hours. These will be topics for another post.