If you are dreaming of a White Christmas it will depend on how much of the snow we have on the ground now is left over on Christmas Day. There could be a brief period of snow showers on Tuesday night and Wednesday morning, but I do not expect much in the way of accumulation, at least here in Nederland and the surrounding Foothills communities.

What makes for a White Christmas?  For some, it is just having measurable snow on the ground on Christmas Day. For others, it is having new snowfall. Looking at my records since 2010, there have only been two years (2010 and 2018) which did not have any snow on the ground at Christmas. There have been 5 Christmases where we have had new snowfall, the largest being 7 inches in 2014: 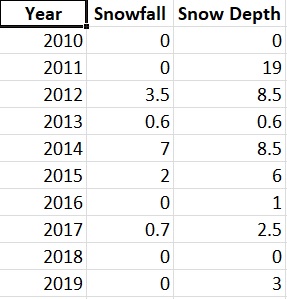 The big weather feature this week will be a storm that will form in the upper Plains on Tuesday and then slowly track into the Great Lakes on Wednesday and Thursday. The main impact of this storm for us will be wind and much colder temperatures Tuesday night and Wednesday.  We could see a few snow showers, but the downsloping northwesterly winds will limit precipitation on the east side of the Continental Divide. Accumulating snow should be limited to locations like Winter Park on the west side of the Divide.

It will be cold on Christmas Eve with highs only in the teens F!

Both days will feature above normal temperatures with highs in the low 40s F much colder air will arrive Tuesday with lows by Wednesday morning near 10 F.

Look for a few snow showers in the morning, otherwise it will be cold and breezy with a high only in the mid teens.

Still dry but warmer with temperatures rising to near 30 F.