The combination of seasonable temperatures and the snow on the ground will keep it feeling like winter in Nederland over the next several days. As is normally the case during the winter (and most of the year) the winds in the mid and upper levels of the atmosphere will be blowing predominantly from the west. This will keep Nederland and the surrounding Foothills communities on the lee side of the Continental Divide mainly dry due to downsloping. The 500mb chart for Thursday shows the 500 mb heights (green lines) and the height anomalies (the red and blue dashed lines): 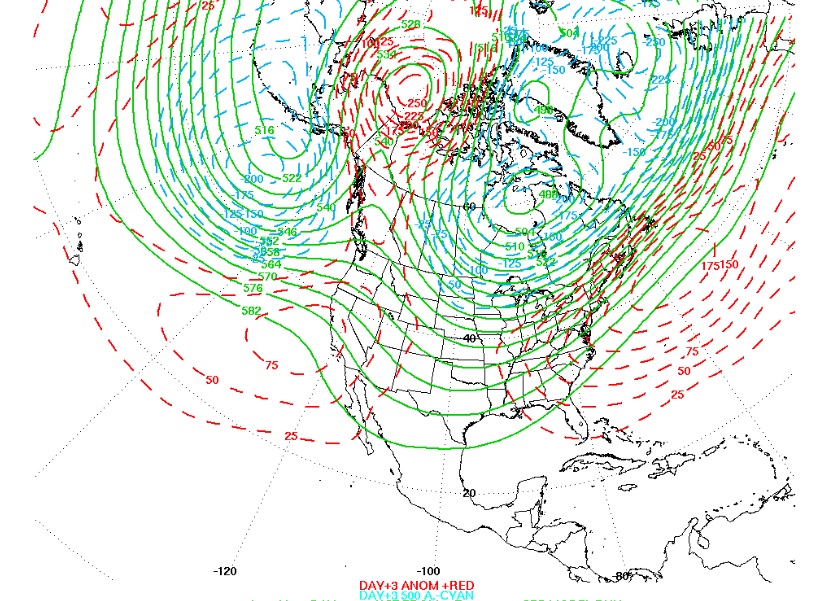 The winds at the 500mb level, which is about 16000 to 20000 feet up in the atmosphere, generally flow parallel to the height contours (the green lines) with lower heights to the left and higher heights to the right. Given this, in the picture above the winds are flowing predominantly from the west to east across the United States.  The dashed lines are showing areas of anomalously high and low heights. Note the low heights over Hudson Bay and the low heights over the Gulf of Alaska.  Also, note the high heights just to the north of Alaska. This positioning of the two lows and the high is a very stable set up in the atmosphere which can remain basically in the same location for days, sometimes even longer. This is also known as a blocking pattern, and this one in particular is called an omega block because it resembles the Greek letter omega.  Here is another look an at an omega block:

Blocks are important because they can result in prolonged periods of wet and dry and hot and cold weather. They can also direct the jet stream, storm track, and unseasonably mild temperatures well north into Canada and the Arctic regions.

Back to our blocking pattern, notice that Colorado is just on the southwest edge of the cold low over Hudson Bay: 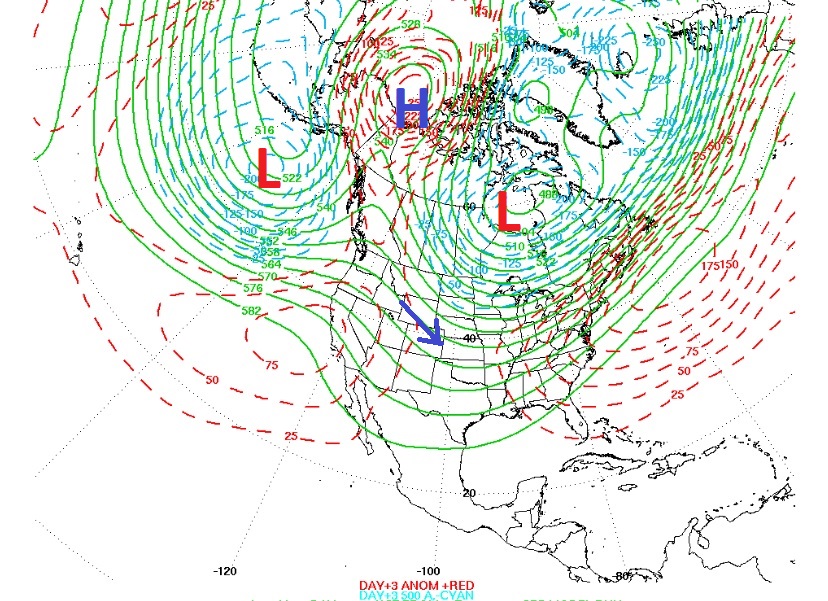 As I mentioned earlier, the winds aloft (the blue arrow) are basically from the west northwest and will stay this way for several days. It does appear that a disturbance will break through this block Thursday night and Friday morning. This system combined with Pacific moisture will bring the chance of some snow, primarily along and west of the Continental Divide. Nederland will likely only on see a few snow showers.

Overall, our weather will be seasonable and dry this week, somewhat boring. It will be breezy, especially at the higher elevations in the Indian Peaks, but I do not see a repeat of the damaging wind event we had a few weeks ago. Look for daily highs in the upper 30s to lower 40s F with lows in the 20s F.

Temps to Cool Slightly for the Start of the Weekend