As forecast the strong winds arrived in the Colorado Front Range Mountains and Foothills Friday night and continued unabated through much of Saturday.  And as feared, these winds combined with the extrememly dry conditions led to a couple of new fires. The first fire, the East Troublesome Creek fire, started in Grand County Friday. If you live the Front Range communities of Nederland, Ward, or Allenspark, you may have noticed how a sunny day quickly turned smokey.  For a few hours, there was even ash falling at our house. This smoke and ash was blowing over the Continental Divide from the East Troublesome Creek fire which at that point was experiencing explosive growth. Remember, a large part of Grand County is in severe drought.  It didn’t take much more than wind to create a raging inferno.

Toward Friday evening, the smoke lifted in Ned. It made for a heck of a sunset.  Here is a timelapse shot I took of the smoke streaming over the Indian Peaks as the sunset:

Notice the turbulent eddies in the air as it flows over the Continental Divide.

This was bad enough, but it would get worse. Around noon today a fire started just north of Jamestown in northern Boulder County. By evening, strong winds pushed this fire all the way down to the plains with spot fires reported along US 36. This fire engulfed nearly 7000 acres in a little under 7 hours! I have mentioned this is previous posts, but we are perilously dry and heading into what may be a pretty windy winter. What happened in Jamestown today could have just as easily happened in Nederland. Residents in the Foothills communities need to be vigilent and ready to evacuate their homes in a moments notice. This is the downside to mountain living. Nearly every part of the country has its own form of natural disaster that can cause loss of life and property.  Ours are fire and arguably flash flooding.

In the short term, a cold front will pass through Northern Colorado this evening. This will shut down the strong westerly winds that helped to fan these fires.   Humidty levels will also increase, but not enough to result in any precipitation. Winds should be lighter on Sunday with highs reaching into the low 50s F.  The winds return on Monday along with slightly milder temperatures. At this time, the winds are not expected to be as strong as they were on Saturday.

Looking in the crystal ball further into the future, a few of the weather models are predicting a chance of snow Monday the 26th and Tuesday the 27th.  This is too far in the future to nail down specifics, but at least it is a glimmer of hope.  Here is the Weather Underground forecast.  Enjoy the rest of the weekend! 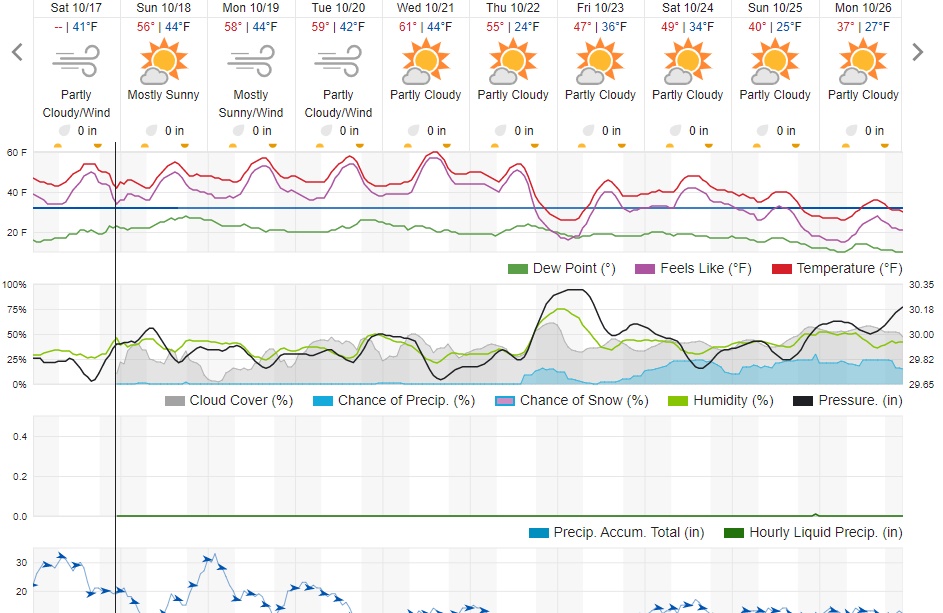