Daytime temperatures over the past few days have ranged from the mid to upper 40s F which is not very unusual for the beginning of March in Nederland. In fact, we are entering the time of year – meteorological spring – when warmer days will start becoming more common here in the Front Range foothills. Spring can also bring the epic snowstorms of lore in the Central Rockies that effortlessly can produce several feet of wet snow … and then in a matter of days the temperatures warm and all of that snow melts – almost is the blink of an eye.

If you are observant, you will have noticed that I said, “meteorological spring.”  While astronomical spring runs from March 20, 2019 to June 21, 2019, meteorological springs runs from March 1st to June 1st.  Meteorologists sometimes have a way of complicating things, but in this case, their definition of spring makes sense. March, April, and May exhibit spring-like weather across the country including bouts of warm and cold temperatures, severe weather, and extreme precipitation events. The clashing of cold and warm air masses in the central part of the United States can trigger violent tornado outbreaks, big snow and ice storms, and flooding. Spring is probably the most active weather season of the year for many parts of the nation.

Anyway, back to Nederland.  Our spell of mild weather will come to an abrupt end this weekend. The pacific moisture-laden storms which have been battering California will take aim on Colorado and the Central Rockies this weekend. An atmospheric river of moisture combined with energy in the mid and upper levels of the atmosphere (well technically the troposphere) will produce copious amounts of snow across the mountains of Colorado. Some locations may see three to four feet of snow by Sunday.

In Nederland and the surrounding foothills communities, the forecast is a bit trickier.  Initially, the winds will be predominantly from the west leaving communities east of the Continental Divide in drier downslope flow. This will change on Saturday afternoon when a strong cold front will sag southward into Northeastern Colorado and become nearly stationary just south of Denver near the Palmer Divide. As the cold front pushes through, much colder air will settle in east of the Divide and easterly upslope winds will develop. This cold upslope flow combined with the overrunning moisture and atmospheric energy will result in snow across much of the northern Foothills Saturday afternoon into Sunday morning. And this snow may be heavy at times.

We saw a similar set up a few years ago in January 2017 when our community just east of Nederland received nearly 18 inches of snow.  Totals will likely be lower than that this time around, but this could be one of the largest snowfalls of this winter season.

As I’ve mentioned before, I like to look at what other meteorologists are forecasting before making a forecast of my own. Often, the consensus forecast is the best one, and getting the opinions of several weather people allows for a more educated “guess”.  The consensus seems to be that Ned will receive somewhere between 8-12 inches of snow. The Weather Prediction Center gives us an 80% chance of receiving over 8 inches of snow and an almost 70% chance of seeing 12 inches or more of snow: 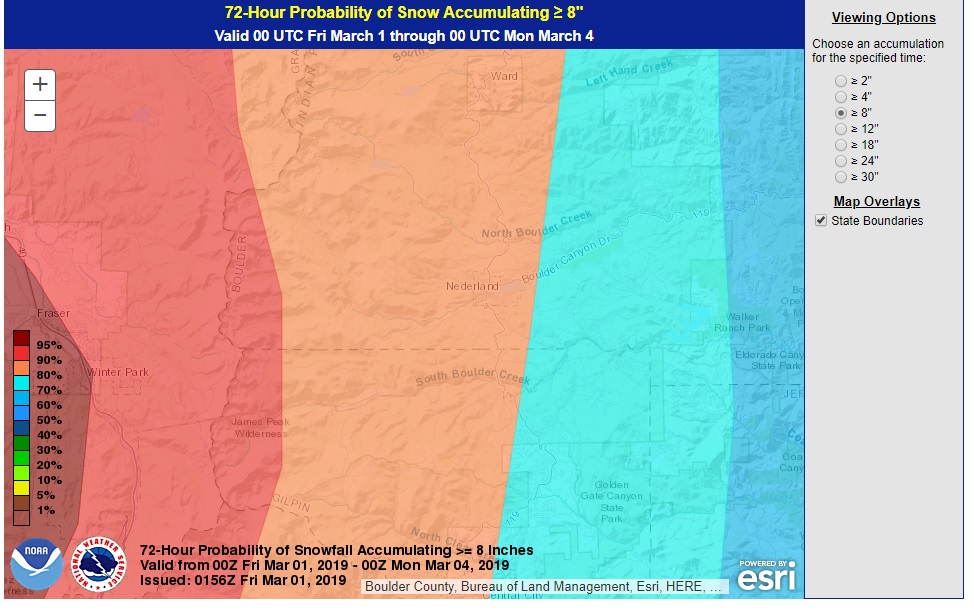 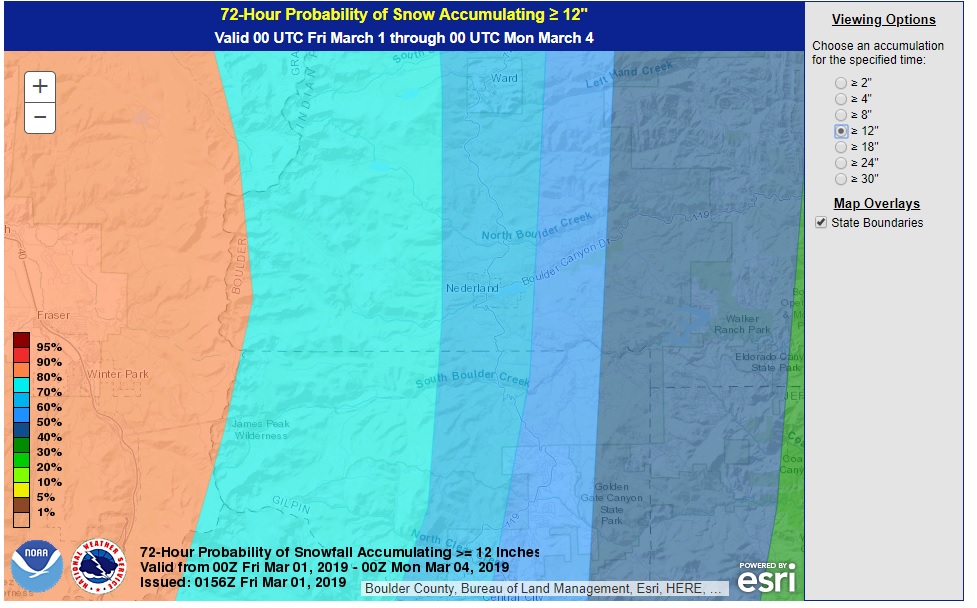 The National Weather Service’s most likely probabilistic snowfall forecast puts us at in the 8-12 inch range with 12-18 inches near Ward and WonderVu: 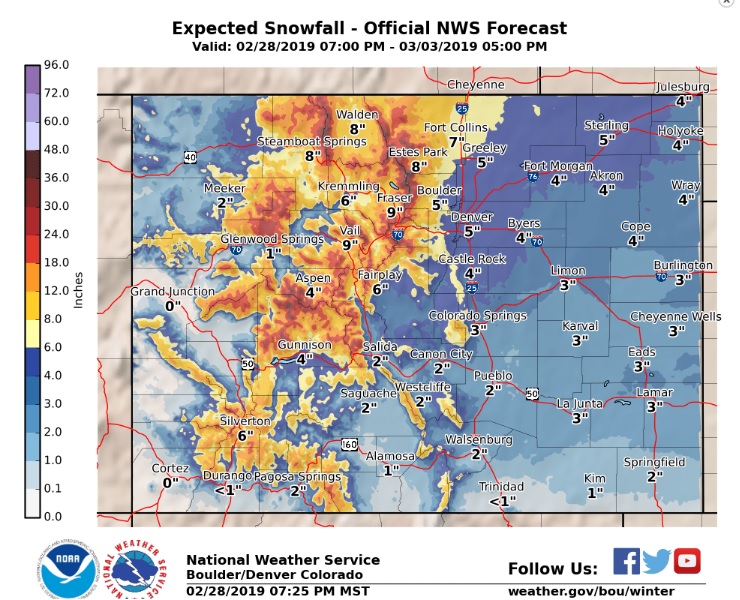 Finally, the Weather Underground forecast shows somewhere between 9-15 inches of snow for us: 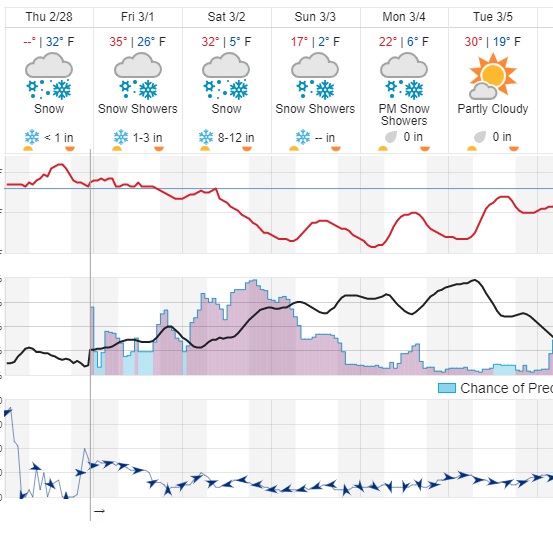 In a nutshell, the forecast will likely change a bit over the next day or so – it always does. But it looks like we are in for a stormy, winter-like weekend. Stay safe out there!

A West Side Snow Event