Tuesday and Wednesday were both superb days here in the Colorado Front Range Foothills. Abundant sunshine combined with temperatures in the low 50s F was a welcome reminder that it is – no fooling – April. If you don’t like winter, well the light is at the end of the tunnel – sort of. While temperatures are moderating and will continue to do so over the next few months, both April and May can bring epic, and I mean epic, snow storms to Nederland. This is also the time of year when warm and moist air masses from the Gulf of Mexico battle with cold polar air masses sliding southward across the United States.  This clash of the titans results in sometimes devastating severe weather over the Great Plains and eastern parts of the country. It also results in a roller coaster of temperatures and weather here in the Foothills.

Take, for example, Thursday’s forecast.  After a high in Nederland of 51 F on Wednesday, a strong cold front is going to sweep through Colorado early Thursday morning. Not only will temperatures remain in the mid to upper 20s F on Thursday, moist upslope flow behind this front will result in a period of light snow. Forecast models and guidance have been consistently showing a 3 to 6 inch snowfall here in Ned, starting in the late morning and continuing through the evening hours. Once the snow ends Thursday night,temperatures will fall back into the mid teens F.

Here is the latest snowfall forecast from the National Weather Service: 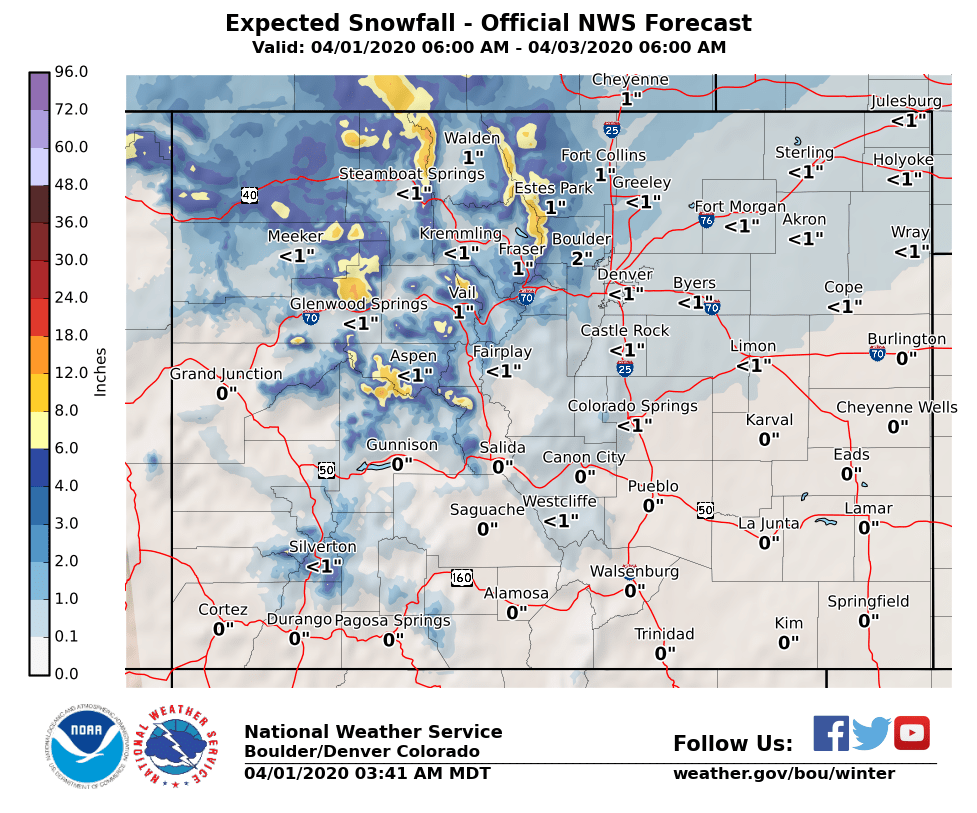 It is mud season here in the Foothills, and things were just starting to dry out around our neighborhood.  This storm will ensure at least another week or so of muddy roads

Speaking of April snow, I thought that it would be interesting to see how consistent our April snowfall is. Here are the snow totals from our past 9 Aprils:

As you can see, with the exception of April 2012 and April 2019, the monthly snowfall tends to be above 20 inches with a few years topping out above 50 inches!

Here is the Weather Underground forecast. Be safe out there!