The snow came Tuesday morning, and it ended up being a relatively high impact event on area roadways.  It is not that the snow accumulations were high. It was more a combination of a relatively wet snow and roadways that were initially above freezing.  The initial snowfall melted on roads, and then as temperatures dropped it froze.  Snowfall rates increased to over an inch an hour. The fresh snow on ice made for fun driving.

My official snowfall measurement was 4.6 inches with 0.53 inches of liquid equivalent.  If you do the math, this result in a 9 to 1 snow ratio which is wet. That means that there was less air and more ice in Tuesday’s snowfall. This is great because we need the water. It did however throw my forecast off a bit.  Many areas just to our south and west did see the 4 to 8 inches I was calling for with a few mountain locations seeing close to a foot: 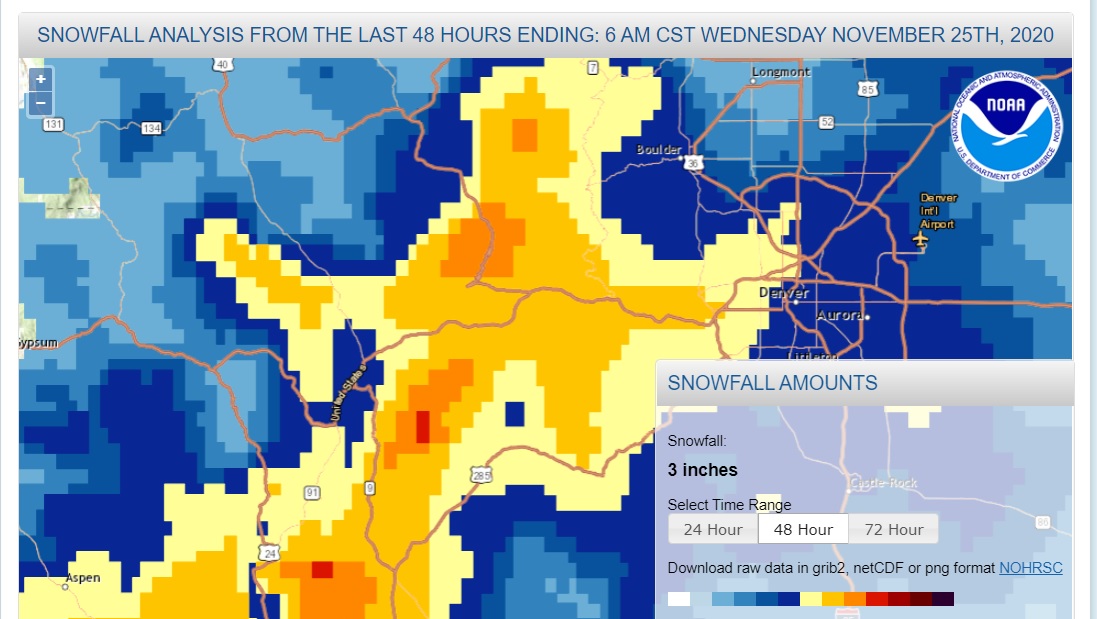 Looking at the map, dark blue is 4 to 6 inches, yellow is 6 to 8 inches, orange is 8 to 12 inches, and dark orange is 12 to 18 inches. There was a tongue of 8 to 12 inch accumulations along I-70 from Loveland Pass to Floyd Hill just west of Denver. This is in keeping with the models which had the heaviest snow accumulations just to our south and west.  The snow ratios were a bit lower than I expected. While my forecast did verify, we would have ended up with nearly 7 inches of snow if we had a 12:1 inch snow ratio.

After highs in near 40 F on Wednesday, colder weather will return for Thanksgiving along with clouds and a few snow showers. Highs will only be near 32 F with lows Thursday night dropping back into the mid teens. The storm system bring this colder weather will be a fast mover and mainly dry.

Friday and this weekend will start an extended period of dry weather with nearly seasonable temperatures. Highs Friday and Saturday will be in the 35 to 40 F. A weak cold front will drop temperatures back into the lower 30s F on Sunday. Nighttime lows will be in the 15-20 F range each day.

This extended period of cool weather will allow our snow pack to melt slowly which is great for replenishing our ground water. Unfortunately, we are still in severe drought, and it will take many more storms before things start returning to normal.