A quick look at the temperature map across northeastern Colorado this morning shows a stark contrast between the west side of the Continental Divide and the east side. The Eastern Plains and the Foothills communities including Nederland are in the single digits and low teens while temperatures in places like Winter Park and Grandby are closer to 40.  That is a bit topsy-turvy considering that locations west of the Divide are normally colder: 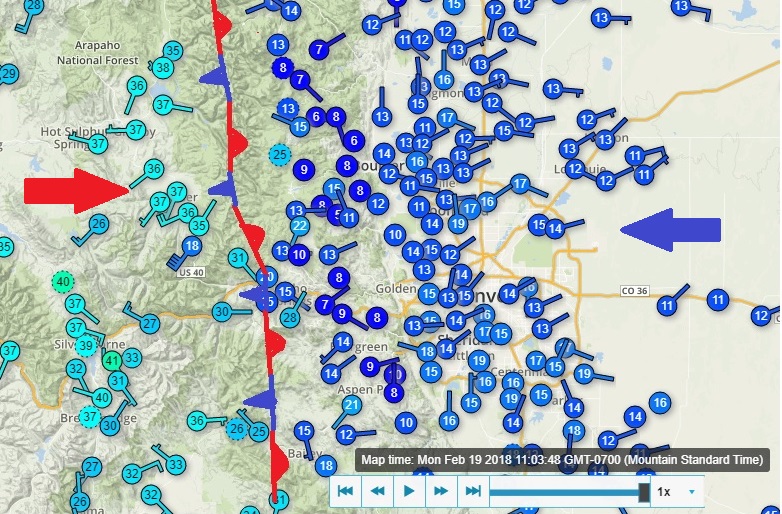 The cause of this marked difference in temperatures is a cold air mass which sank southward across the plains on the east side of the Divide Sunday night. Looking more closely at the temperature field, it appears that the top of this cold air mass is around 9000 feet, just above the town of Eldora.  This means that the cold air does not even extend up to the Continental Divide. I like to imagine a stationary front right along the Divide, but in reality it is the mountains which are acting to contain the heavy, cold air mass to the east.

Denver had a high near 70 F on Sunday. By Sunday evening, the temperatures had plummeted to 23 F.  Those are wild west temperature swings.

If you could climb into a hot air balloon in Boulder and slowly ascend into the sky, the winds would be from the east/northeast up until about 9000 feet.  Then,suddenly the winds would swing around from the southwest and strengthen as you climbed higher with temperatures actually warming!  As I have said before, the atmosphere is three dimensional, and conditions can change quickly as you ascend and descend the mountains.

As for the snow…

As a sanity check I always check the forecasts from several other sources including the National Weather Service, Weather5280, OpenSnow, Denver Channel 7, and Denver Channel 9. From this I try to establish a baseline or consensus forecast. If you take a skilled group of forecasters, the consensus forecast is often the best forecast.  That forecast can then be fine tuned to take into account local effects due to the mountains.

This is a tricky forecast in that many of the ingredients that we usually look for for a heavy Foothills snowfall are not really there. For example, upslope flow is weak and shallow. However, we are in a favorable position relative to a strong upper level jet streak this afternoon and tonight, and this will likely result in enough lift to cause bands of heavier snow to develop. Locations under these bands will quickly pick up several inches of snow.

Right now, it looks like the consensus is that 4 to 8 inches of snow will fall around Nederland.  I think this is a bit high, but again it depends on how those jet steak induced snow bands set up. Here is the most probable snowfall forecast map from the National Weather Service:

Regardless of how much snow falls, the roads on Tuesday morning will be slick and the temperatures will be cold, hovering right around 0 F here in Ned. Stay warm and enjoy the snow!

Nederland Weather for the Week Ahead