The winds are howling along and near the Front Range Foothills this evening. Nederland, Ward, Rollinsville, Allenspark, and surrounding areas have been buffeted by winds gusting in excess of 60 mph. The trees are “dancing” in our yard this evening as they twist and bend in the wind. There are several factors in the atmosphere which are contributing to our strong and gusty winds:

Each of these factors results in energy in the atmosphere which can help to strengthen winds as they flow over the Continental Divide. Atmospheric stability helps to reduce the amount of energy wind loses from mixing and can enhance the formation of a wave of moving air. Much like an ocean wave, you can think of this wave of air “crashing” over the Divide, resulting in extremely strong winds in portions of the Foothills. The 00Z NAM Skew T shows these winds: 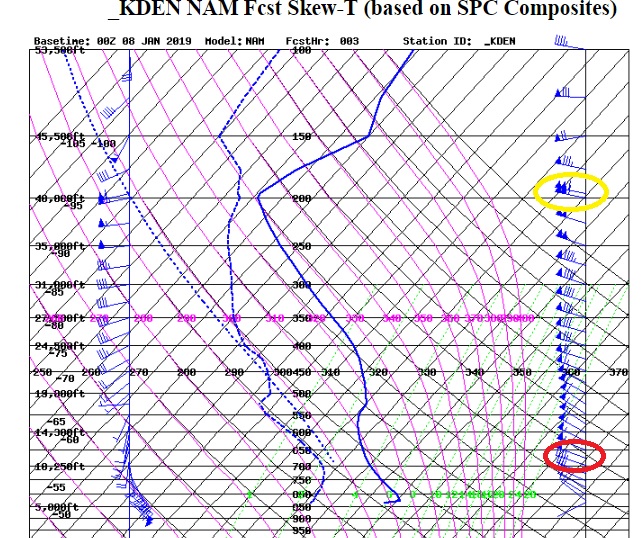 The winds will become less intense overnight as the pressure and thermal gradients weaken across northern Colorado. By tomorrow morning, the NAM Skew T is showing winds more in the neighborhood of 10-20 kts: 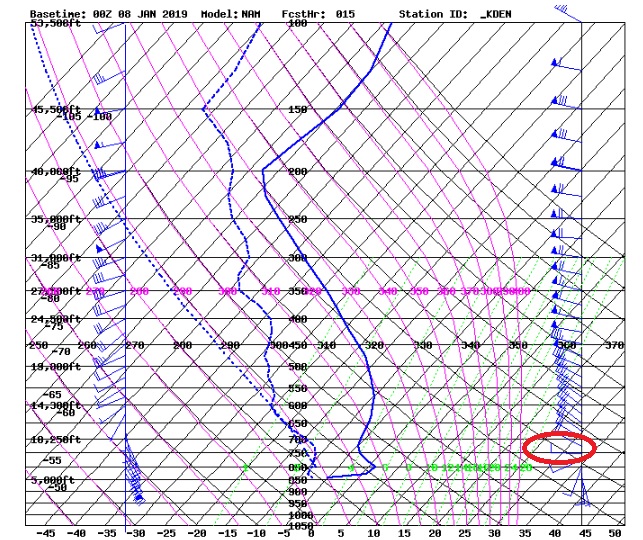 The winds on Tuesday should continue to decrease in intensity. Any snow will also have ended east of the Continental Divide as the atmosphere stabilizes and dries out. Temperatures should moderate on Tuesday and remain mild for this time of year through Thursday.  On Friday, the GFS is hinting at a slight cool down along with an increase in moisture. This may result in some light snow Friday into Saturday, but that remains to be seen.