A deep, moisture-laden storm system will push into the southern Great Basin on Thursday and then very slowly track across Arizona and New Mexico on Friday and Saturday. The slow eastward motion of this storm will result in a prolonged period of southwesterly winds across Colorado over the next few days, and this will produce several feet of snow in portions of the San Juan Mountains in southwestern Colorado.

Despite the copious amounts of moisture and energy associated with this storm, the necessary ingredients are not there for a significant snowfall in Front Range Foothills and mountains of northeastern Colorado. The prevailing winds will not be from the east, a prerequisite for upslope snowfalls here in Nederland. Also, the center of the storm is tracking well to our south, limiting the amount of atmospheric energy available in our neck of the woods for snow production.  That said, the GFS model has been consistently producing 0.25 to 0.5 inches of liquid in the mountains around Nederland, Blackhawk, and Rollinsville, and this would translate to several inches of snow.

The slow evolution of this storm system will result in periods of light snow starting Thursday evening and continuing into Friday night.  After our recent spell of cold temperatures, whatever falls should stick. As a surface low gets going on the Eastern Plains of Colorado on Friday, a band of snow will likely form somewhere from the Continental Divide east to Boulder/Denver, and this could produce a quick shot of accumulating snowfall.

The Weather Prediction Center places our odds of seeing 1 inch or more of snow Thursday through Friday at 80%.  Our chances of 4 inches or more snow are at about 60%. 8 inches or more are around 25%.  The National Weather Service’s best guess forecast is:

This only goes into early Friday morning but shows amounts in the ballpark of 1-3 inches in Nederland and the surrounding Foothills communities. Obviously, the further south and west you go in Colorado the better.

Stay tuned.  I’ll post another update Thursday evening. At least someplace nearby will be receiving a big snowfall. Some of the most dought-ridden, moisture starved parts of our state will be getting a lot of much needed precipitation with this storm! 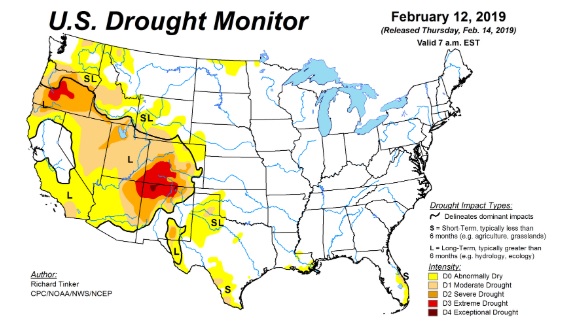 Blizzard to End Streak of Mild and Dry Weather