Snow pack is looking great near and along the Continental Divide in Northern Colorado. This graphic from the Colorado Basin River Forecast Center shows the SNOTELs along and east of the Continental Divide in Boulder and Larimer Counties reporting anywhere from 150% to 200% of normal snow pack for this time year. Remember, this is very early in the season, but it is nice to see an early start to the snow season here in Northern Colorado: 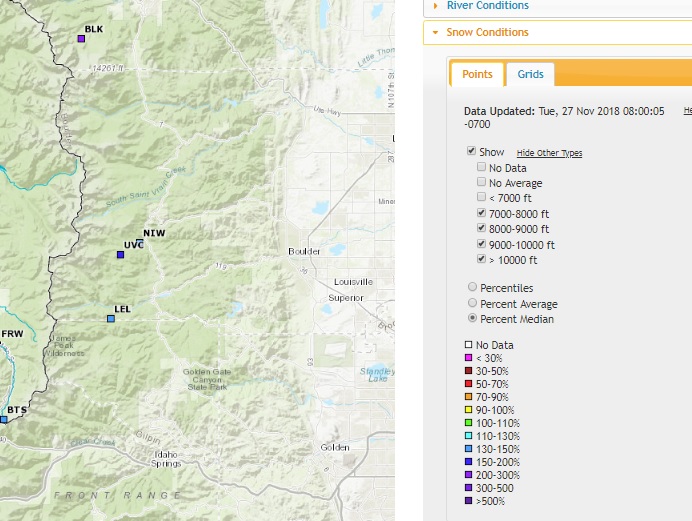 The snow water equivalent plot at the University Camp SNOTEL just outside of Nederland and Ward, shows that our snowfall for this year (the blue line) is well ahead of the snowfall for last year (the green line) as well as the long term median (the purple line):

After a brief respite from the cold and snow, more winter weather is on the way for the end of this week and the start of next week.

A weak disturbance will cross northern Colorado tonight and early tomorrow morning bringing a chance of a fleeting snow shower in the foothills east of the Continental Divide. Locations near Nederland may receive a light coating of snow just in time for the Thursday morning drive to work. A more potent storm system will affect our weather on Friday as an upper level disturbance crosses the Central Rockies and forms a cutoff low over eastern Colorado. While this is not a favorable storm track or position to bring snow to Nederland, clouds and snow showers will be around the area, and locations on the Eastern Plains may receive accumulating snow. A trough will remain over the western United States through the remainder of the weekend. This will keep temperatures cool, and as pieces of energy pass through this trough, clouds and snow showers will be possible at times. In general, the winds will favor snowfall on the west side of the Divide in locations such as Winter Park, but a stronger system may produce enough energy and upslope flow to result in a period of snow in the foothills of Boulder and Larimer Counties Sunday night and Monday. Stay tuned!