There was a quick round of snow showers this evening in and around Nederland, but accumulations where generally under a half an inch. The clouds and moisture this evening are associated with an upper level disturbance which is expected to deepen over the southern Rockies and Southern Plains through midday Friday. While this system is not expected to have much impact on our weather, it will spread a wide swath of precipitation and severe weather across the central and eastern portions of the country. If you were hoping for a big dump, this storm system will do little more than bring a few snow showers to the Front Range Foothills over the next 24 hours. The 84 hour precipitation forecast from the NAM model shows the wide swath of precipitation from eastern Kansas to northern New England, but almost nothing over eastern Colorado: 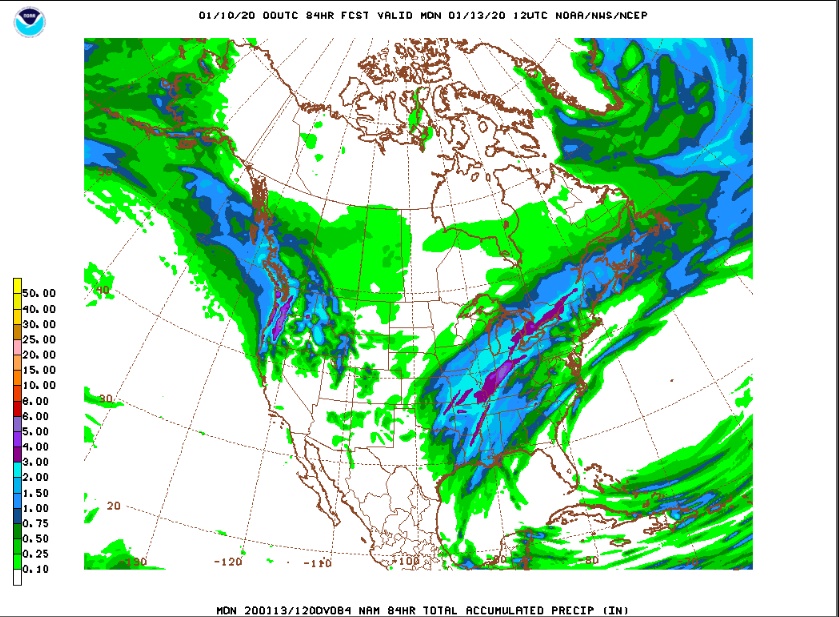 The central and southern Rockies will remain in a trough-like pattern at least into early next week.  This will keep temperatures unseasonably cool. Unfortunately, at least for snow lovers, there will be little precipitation action at least on the east side of the Divide. Winds across the Front Range will be predominantly from the west/northwest through Tuesday of next week, and this will keep Nederland and the surrounding foothills communities mainly dry.

A quick look at the weather underground forecast for Ned says it all:

As for winds, it will be getting more blustery, especially in the high country as the weekend progresses. By Sunday and Monday, winds around Brainard Lake are expected to be howling, with gusts of 50 to 60 mph possible.

Enjoy the dry but cool weekend. Remember, it is just another day in paradise!