As advertised, Saturday was a very mild day across the Front Range Mountains and Foothills. The temperature climbed to 60 F at our house just east of Nederland, Colorado. This was 16 degrees F above the normal high for Ned for this date of 44 F. In my ten years worth of records, only November 9, 2016 rings in warmer for this day with a high of 62 F. As usual, the plains adjacent to the Front Range foothills were even warmer partly because of the lower elevation and partly due to the adiabatic warming of downsloping winds. Denver set a record high of 77 F for the date, just topping the previous record of 76 F set in 1927.

The 500 mb chart from Saturday evening shows the positive PNA pattern that we have been stuck in now for several days. The warm ridge in the West has pushed eastward from the West coast to the South/Central Rockies resulting in our mild weekend. A cold trough remains stubbornly anchored over the northeastern United States: 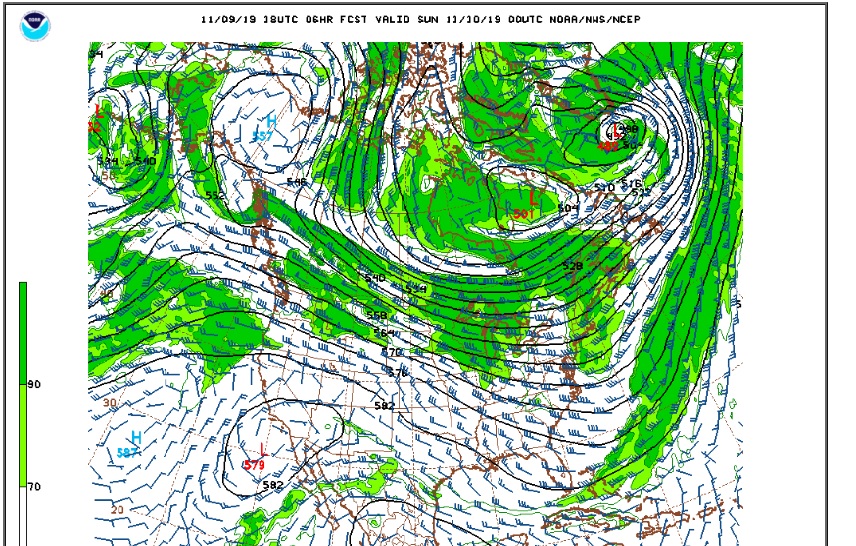 Sunday promises to be another mild day for Nederland and the surrounding Foothills Communities. A strong cold front will be approaching from the north during the afternoon and evening hours. Thermal gradients will be tightening across Colorado as the day progresses, and this will result in breezy conditions particularly in the Front Range Mountains and higher Foothills. The model soundings for midday Sunday show sustained winds of around 20 kts from about 9000 feet up to 17000 feet.  There could be some higher gusts up to 30 kts due to mixing particularly in the Indian Peaks above Brainard Lake: 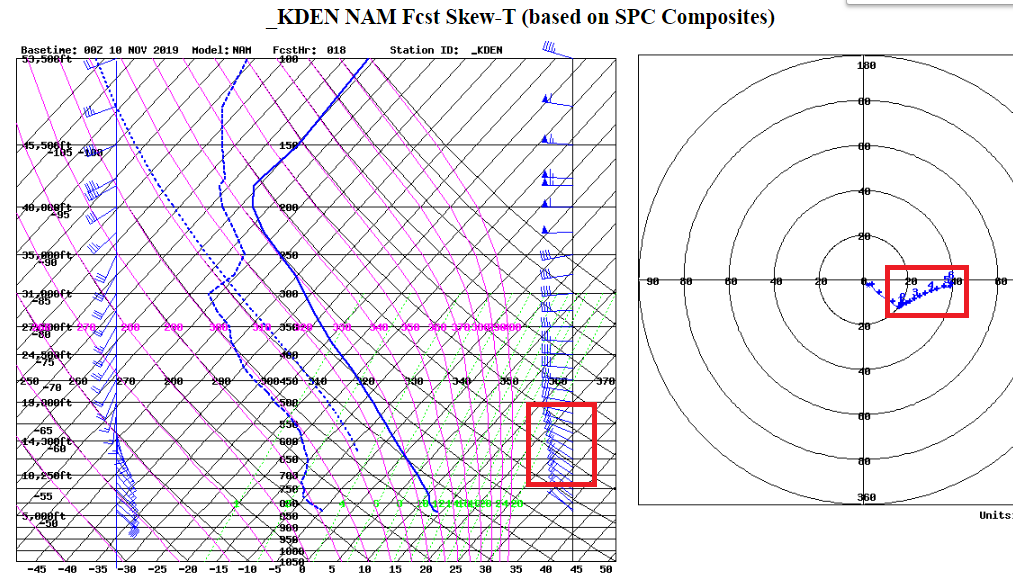 Things get interesting late Sunday night when much colder air arrives on northeasterly winds.  Notice that the arrival of this front has slowed down by an hour or two. The models continue to show upslope flow up to about 10500 – 11000 feet by Monday morning, with a basically saturated atmosphere down to the Eastern Plains. Precipitation should start off as freezing drizzle, but as the moisture and upslope flow deepen, light snow is expected.  Models are slightly more aggressive and in agreement with precipitation amounts. This will not be a big snow even, but 1 to 2 inches could fall. I still think that the highest amounts will be in the lower Foothills east of the Peak to Peak highway. This could be one of those events where Boulder gets more snow than Nederland.

The Weather Underground forecast for Nederland shows a better chance of snow than it did before:

As I said in my last post, while this is not a big storm, sometimes timing is everything.  Snow and freezing drizzle will still be in the air for the Monday morning commute and roads will be slick. I’m sticking with my 1-2 inch snowfall forecast for Nederland and points east in the Foothills. These events always seem to favor the the lower Foothills and plains adjacent to the Foothills. This cold snap will be short lived. As you can see in the Weather Underground forecast above, temperatures will quickly rebound to above normal levels by midweek.

Stuck in the Block