The strong cold front which brought freezing drizzle, snow, and ice to the Colorado Front Range on Monday morning performed well when compared to most forecasts. As is common with these types of synoptic set ups, the heaviest snowfall did fall east of the Peak to Peak highway, with the highest amounts reported in places such as Boulder adjacent to the Front Range Foothills. This is clearly shown on the Monday morning CoCoRaHs map for Boulder County: 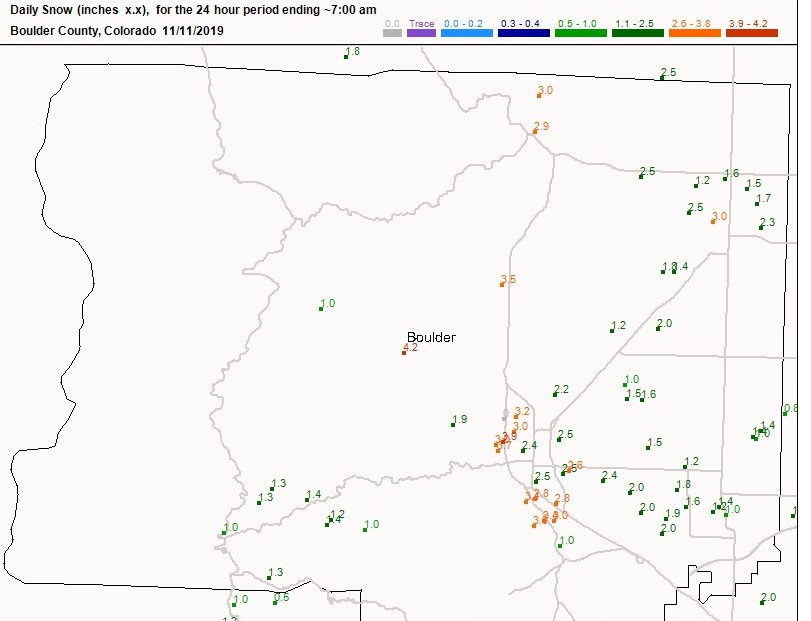 These relatively shallow cold air masses tend to push up against the Front Range foothills as they spill southward over the Eastern Plains.  The upslope flow is shallow, the east/northeasterly winds are not normally that strong, and the cold temperatures tend to limit the amount of moisture available for producing snow.  The lower Foothills produce just enough lift to support decent dendritic (snowflake) growth, but this does not spread into the higher elevations of the Colorado Front Range.

The snow that fell on Monday is mostly gone already, although the woods on the north facing slopes around our home still have several inches of snow which has compacted into almost ice from daily thawing and refreezing. Temperatures will moderate over the next few day as the stubborn ridge which has been anchored over the western United States pushes eastward into the central and southern Rockies. The GFS 500mb map shows the axis of this ridge centered over Western Colorado and Eastern Utah on Friday morning: 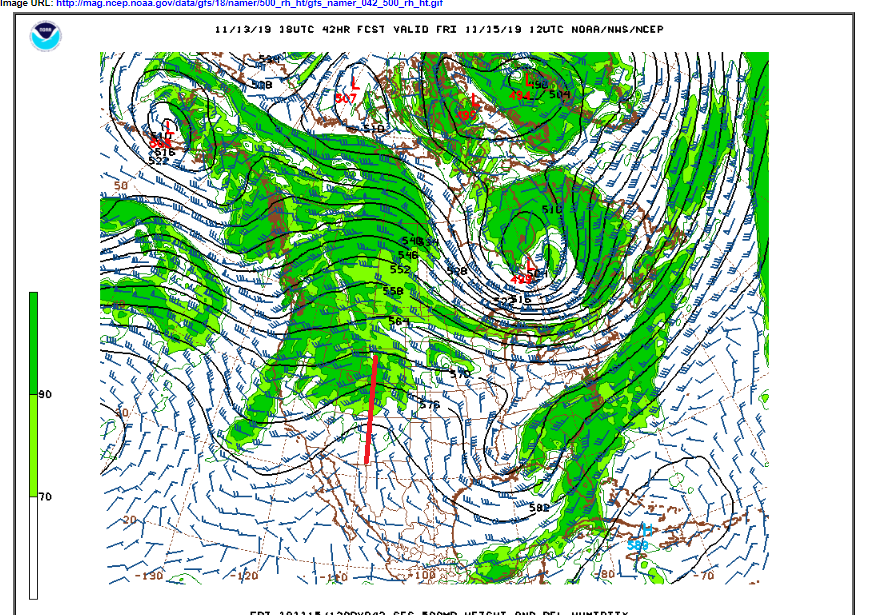 Because of this, Friday should be the mildest day of the next 7 days or so. The approach of the ridge also means that there will be little or no precipitation and winds should lighten up across the high country, particularly on Friday.  We will be in a bit of a split flow regime to start the weekend with an upper level low well off of the southern California coast and a northern stream shortwave trough swinging into the Pacific Northwest. The GFS 500mb forecast map shows both systems on Saturday morning with the northern stream shortwave digging into eastern Idaho and western Wyoming: 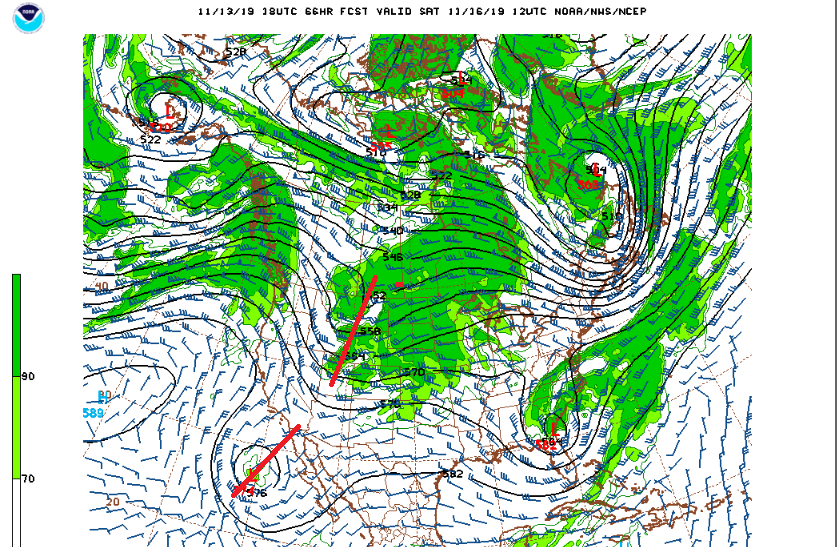 There is usually lift to the east of a trough axis (the red lines on the map above), and this shows up well as clouds and moisture to the east of the northern stream trough. Note that these troughs do not appear as though they will phase. A phase-in would result in a deeper more energetic storm, but the forecast models are not heading in this direction at this time.  The interaction of these two troughs may, however, cause the northern stream system to track further southward, and this could influence our weather Saturday night and Sunday, bringing colder temperatures and the chance of some snow. The GFS model is a bit of an outlier on this solution, but the 500mb forecast map shows the northern stream trough digging out over western Colorado by Saturday evening, placing much of northern Colorado in a favorable position for at least some snow, especially the west side of the Continental Divide:

As the trough pulls away to our east later this weekend, the clouds will diminish but winds should increase. The forecast Skew-Ts show the potential for strong and gusty northern winds in the 20 to 40 kt range on Sunday into Monday:

The Saturday system will be a bit warmer than recent ones with snow levels likely starting out above 7500 feet.

Stay tuned! We’ll keep an eye on this storm.

The Weekend to Begin on a Wet Note

Another Round of Moisture will Push Across Northern Colorado this Week