You’ve surely seen the forecast by now. After a hot, breezy weekend, the weather will undergo a marked change Monday night and Tuesday when a strong cold front will usher in winter-like conditions across Northeastern Colorado. From Monday night into Tuesday night heavy snow is expected to fall across the Northern Front Range Foothills. According to the latest National Weather Service forecast, Nederland may be in for 12-18 inches of snow: 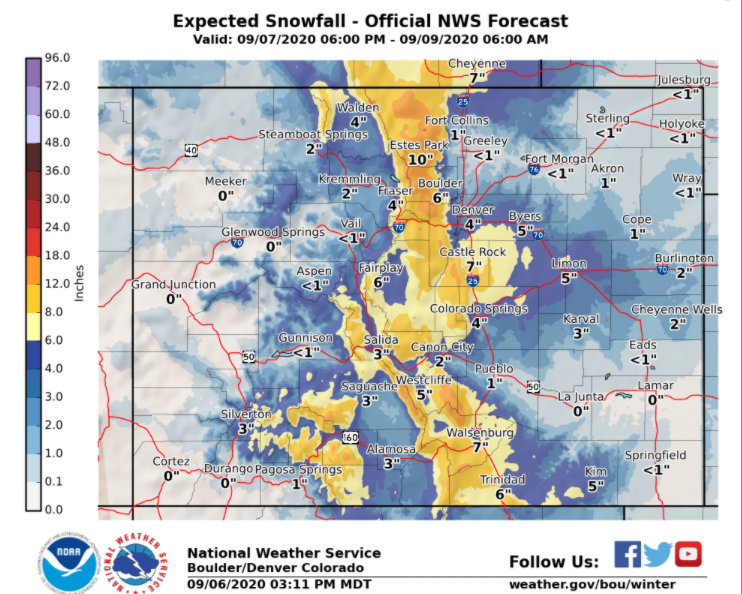 This is unprecedented in my records.  In the 10 years we have lived in Nederland, I have recorded only one measurable snowfall in September – 0.7 inches on September 12, 2014. Again, that was only 0.7 inches.  The other exceptional aspect of this upcoming storm is the amount of cold air associated with it. Temperatures in Nederland could drop back into the 15-20 F range Monday night!  The coldest temperature I have ever measured in September was 24 F on September 12, 2014. The earliest freeze I have ever measured was 32 F on September 7, 2010. If this storm materializes, not only will it be the largest (by far) September snowfall in my records, but it could also bring some the coldest temperatures I have measured for the month.

Naturally, I have been somewhat skeptical, but the models have been consistent in their handling and tracking of this storm. Such a strong early season storm seems unbelievable, especially after our hot and dry summer.  This snow is just what is needed to help with the Front Range Fires and our drought. Back in weather school, I had an instructor who said that you should never forecast a record beaking weather event. However,the data continue to support a snowy start to September here in Ned.

Several things need to be considered with this storm when trying to determine what accumulations may be:

1) The ground is really, really warm

2) The trees still have leaves on them

3) The sun angle is equivalent to that in late March

It is going to start snowing after midnight early Tuesday morning. Temperatures will be plummeting into the 20s F, but even so, it will take an hour or two to really start accumulating on dirt and grassy surfaces.  It will take longer for the snow to stick to roadways, but the Tuesday morning commute down Boulder Canyon could still be dicey.

Heavy, wet snow will likely fall on the plains adjacent to the Foothills as well. The aspen and cottonwoods still have leaves, and the weight of the snow will result in broken branches and power outages.

The sun angle is still high. Even though it will be cloudy and cold on Tuesday, the energy from the sun (or insolation) should keep most area roadways wet and slushy.  Things will freeze over Tuesday night – I expect the roads to be the worst then.

Instability could be a bit of a wild card with this system. This could result in localized higher amounts of snowfall, particularly in the Front Range Mountains and Foothills.

The quantitative precipitation forecast (QPF) for this storm put Nederland between 1 and 1.25 inches of liquid (circled area): 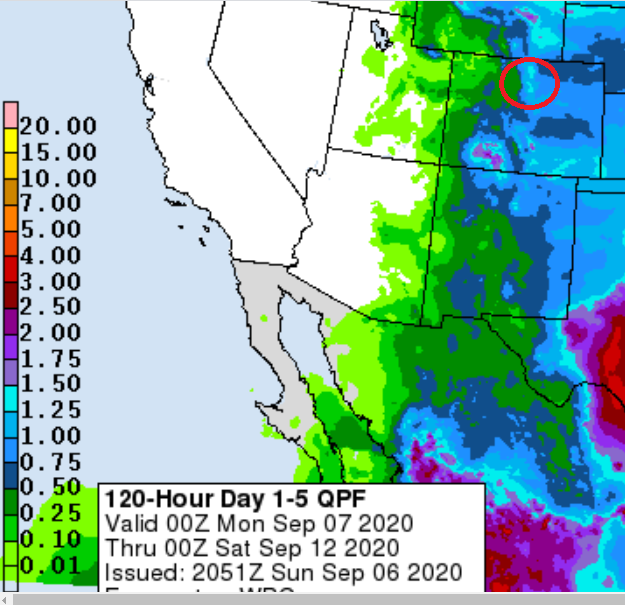 The snow will be wet and heavy at the start of the storm, but as the temperatures drop and the dendritic snow growth becomes more efficient, snow ratios could reach 1:12 or even 1:15.  That puts us in the 12 to 16 inch accumulation range.

Check out this report by the National Weather Service about largest one, two, and three day temperature changes in Denver: 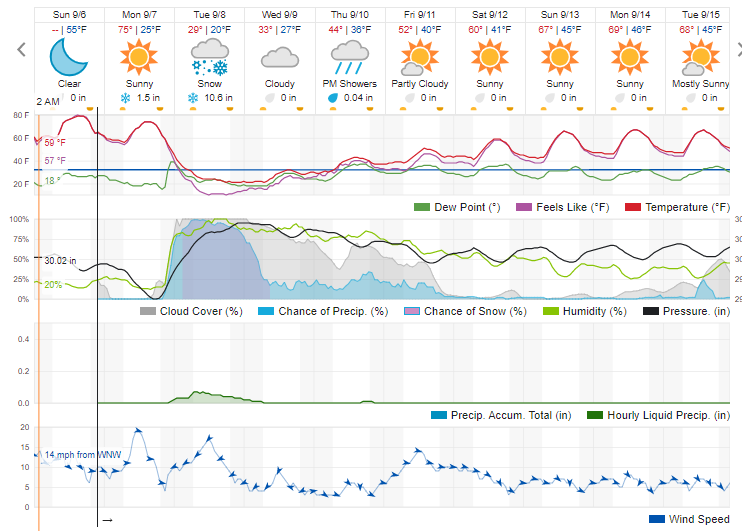 Basically, we will have 24 hours of snow and cold upslope flow. As for snow total, I like the 12 – 18 inch forecast. Everything I see so far supports amounts like this. I’ll post again tomorrow.

Weekend Storm Recap and a Quick Look Ahead