We will be treated to one warm day this weekend, before temperatures fall back to slightly below normal levels for much of next week. On Saturday temperatures in Nederland and the surrounding Foothills communities are expected to soar into the mid 40s as an upper level ridge builds across us during the day. The GFS 500 mb map nicely shows this feature around midday Saturday (Colorado – the square state – is outlined in Red): 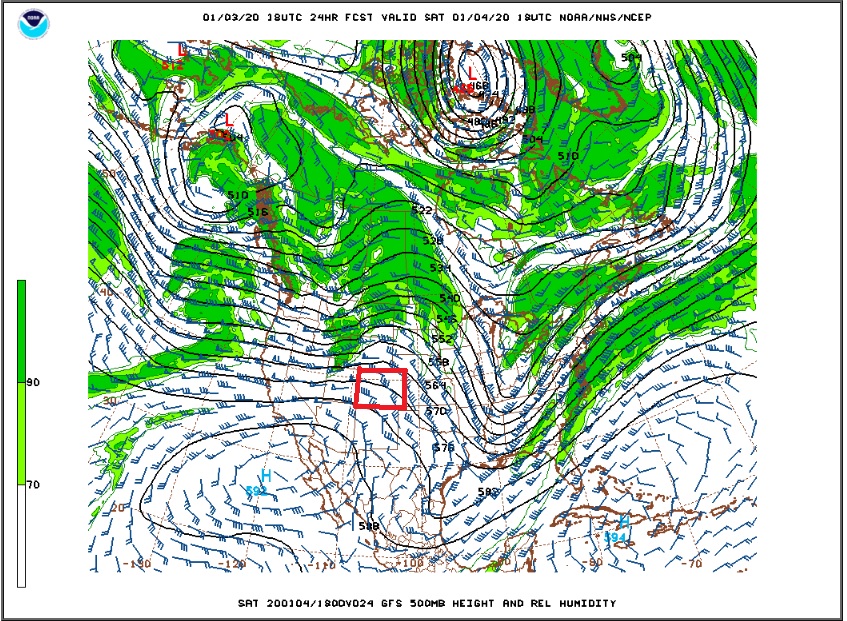 This respite from the cooler weather will be short lived.  We are in a progressive weather pattern with upper level disturbances moving fairly quickly from west to east across the country. By Sunday evening the upper level disturbance off of the West coast – the green area of higher humidity in the map above off of the California coast – will be digging into the Central and Southern Rockies: 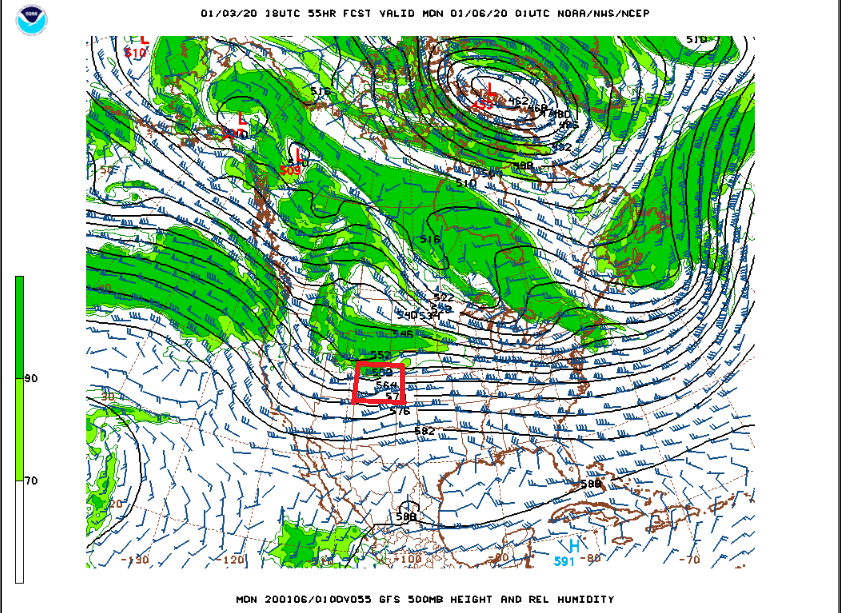 This will bring a reinforcing shot of wind, cold air, and snow showers to the Front Range Mountains on Monday. In the map above, you can see how zonal – or west to east – the flow is across the United States.  There are no deep troughs or ridges to slow down the flow. This is normally not a good pattern for snowfall for the Front Range Foothills.  Since the winds are westerly through a deep layer of the atmosphere, we tend to get downsloped, and as a result we stay drier. The west side of the Continental Divide often does see accumulating snow as these upper level disturbances zip by. Fast moving systems do not tend to bring a lot of snow, but if you get two or three of them in a week it can add up. Indeed, the next in a series of fast moving disturbances will be on our doorstep on Thursday morning. By then, the Monday disturbance will be off of the coast of Nova Scotia: 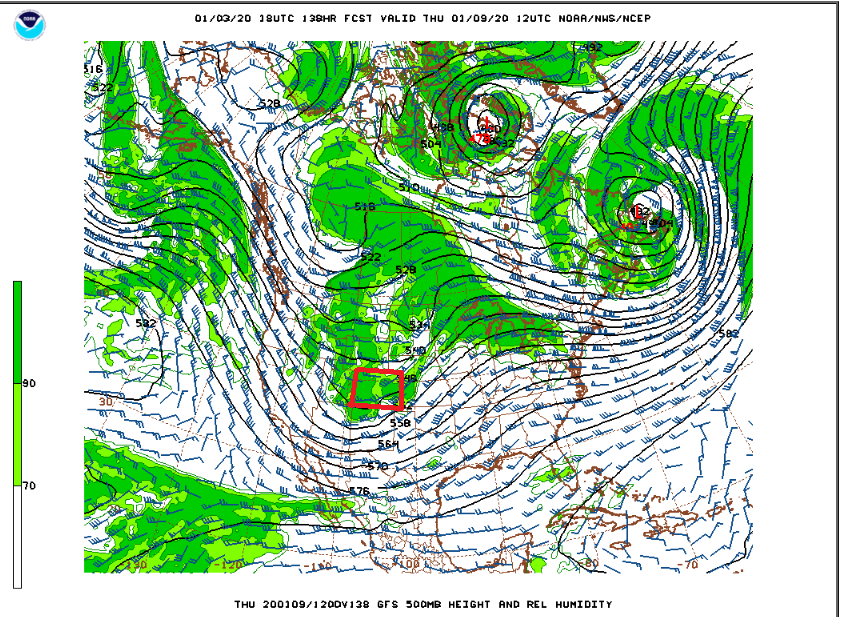 This system will bring another shot of cold air and perhaps a few snow showers to our neck of the woods.

Overall, the next week or so looks to be dry but cool.  What I am not seeing at the moment is our typical January warm up when a cold air mass anchors itself over the Eastern United States leaving the West warm and dry. In fact, 8-14 day outlook from the Climate Prediction Center shows the opposite – cold in the West and warm in the East: 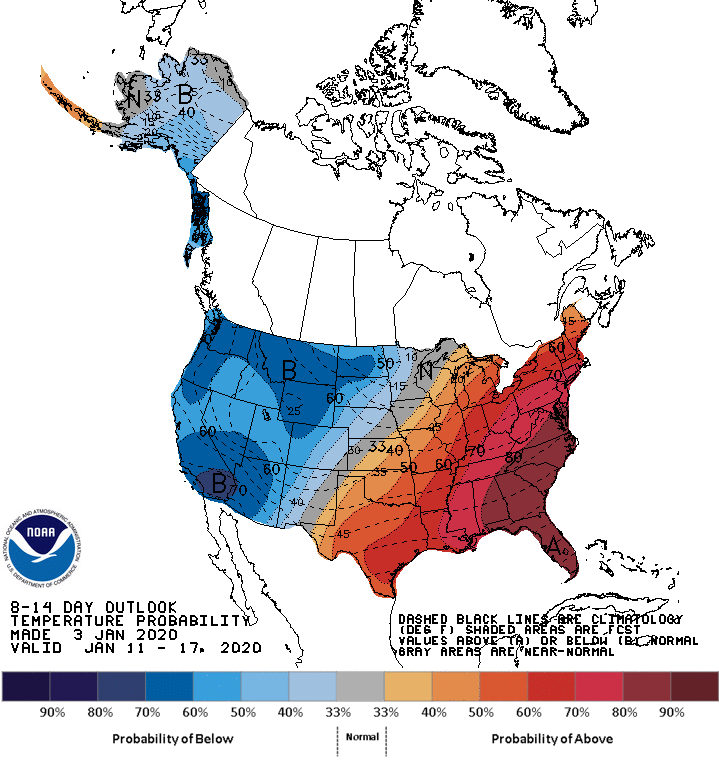 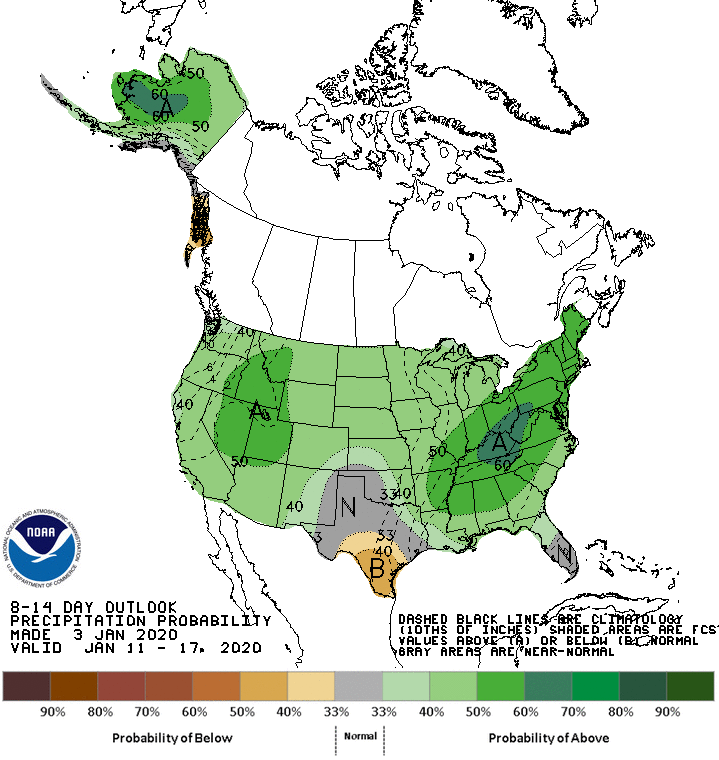 Finally, if you launched yourself in a balloon from the top of Longs Peak this evening, you would end up over southern Florida in about three and a half days.  This is based on weather model trajectory forecasts. If you are looking for warmer weather, this may be the way to go: