The forecast for the return of cold and snow to northeastern Colorado is pretty much on track. Two weak storm systems, one on Thursday night and Friday and one on Saturday will bring clouds and periods of light snow to Nederland and the surrounding Foothills communities.  This is not a big storm, but the prolonged nature of it combined with cold temperatures will likely keep roads icy.

Temperatures will gradually cool down to near 30 F by morning. It will remain dry with light winds.

Temperatures will drop back into the 20s F during the day as clouds thicken. Light snow will develop during the mid to late afternoon hours as upslope flow becomes more established in the Front Range Foothills. Accumulations should be light.

Periods of light snow and flurries will continue with accumuations of 1 to 2 inches. Lows will be in the mid teens F with an easterly upslope wind.

The light snow will continue with another 1 to 2 inches possible. Highs will be near 20 F.

The first storm system will begin to pull out of Colorado Friday night, and as it does the snowfall will diminish. We could even see some breaks in the clouds with temperatures dropping back to near 10 F

The second storm system will pass to our north on Saturday. This is not a favorable track for snow for locations on the east side of the Continental Divide. We could see some passing snow showers during the afternoon, but I think accumulations will be under 1 inch. Temps on Saturday will only reach into the upper 20s F.

Here is the snowfall forecast from the National Weather Service.  Total snow through Satuday will range from 2 to 4 inches: 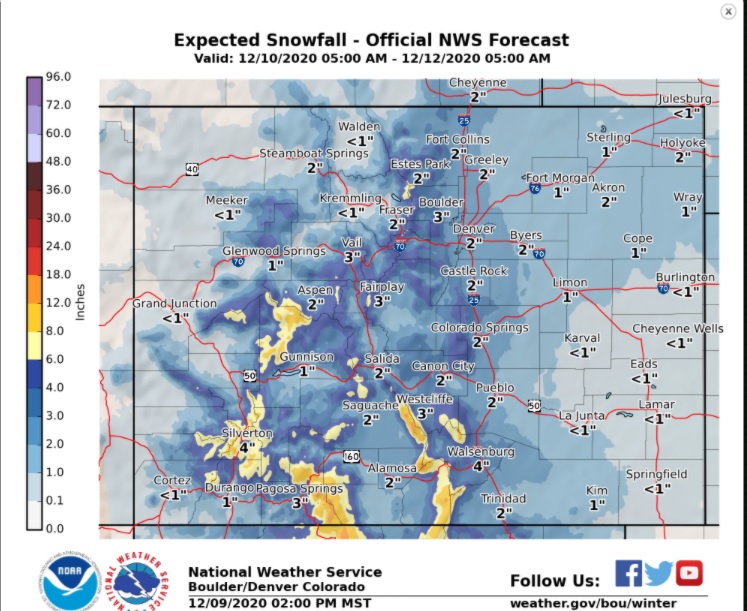 Watching for the “Big H”