My records only go back 10 years, but I have enough data to make analyzing top daily snowfalls and top snow storms fun (of course this depends on what your idea of fun is). As I mentioned in my last post, Thursday’s snowfall ranked number four on Nederland’s top one day (24 hour) snowfalls in my records: 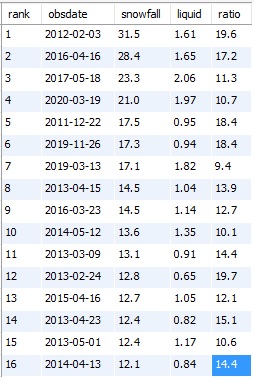 This table shows all of the one day snowfalls (with the day starting at midnight) equal to or greater than 12 inches since September 2010. It also shows the liquid equivalent and snow ratio.  If you do the math, one day snowfalls of 12 inches or more are relatively rare. We see 1.6 of them each winter.

Here are the top snowfalls from my records.  Note that this is different from the table above in that a snow storm can span multiple days:

According to this table, we see on average three snow storms of 12 inches or more each season. I like to think of the one day snowfall table as a measure of snow intensity, but most of the time we are more interested in storm total snowfall, particularly when talking about records.

Just more data to chew on.