Despite cooler than normal temperatures over the past few weeks there has been a noticeable lack of snow in Nederland and on the east side of the Continental Divide.  At our house, we have had snow on the ground now for about a month and a half, but again much of this fell in November. The cooler temperatures and the low sun angle combined with the fact that our property faces north has allowed the snow to stick around.

After another mild day on Tuesday, a storm system will pass over Colorado on Tuesday night and Wednesday. While this system will cool temperatures down in the Front Range Foothills, most of the snow associated with this system will fall along and west of the Continental Divide. This will help to freshen up the snowpack at many of the central and northern Colorado ski areas, but will leave Nederland, Rollinsville, and Blackhawk with little more than a few flurries.

On Thursday and Friday, a ridge will be building over the western US while a deep trough of low pressure digs into the eastern US.  The map below shows these features over the US on early Friday morning: 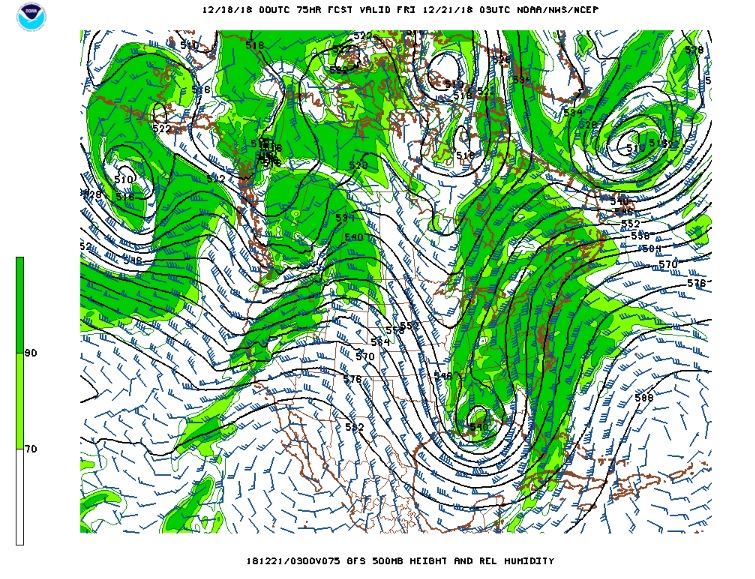 The deep storm in the East will result in widespread rain while the ridge in the West will result in predominantly dry conditions across most of region.  Colorado will be located under northwesterly flow, and, when moisture and energy are available, this type of pattern can result in periods of light snow west of the Divide.  For Nederland, however, most of the cloudiness should be confined over the Divide.

This pattern will be short-lived. By this weekend, the ridge will begin to break down, and as it does cooler temperatures will return to our area. The 8-14 day outlook shows this trend toward cooler temperatures. The next storm system to affect the Front Range will be late Christmas day and Christmas night.  It is too early for specifics, but some snow is possible with this system: