As is common here in the Colorado Front Range in January, the weather in Nederland and surrounding foothills communities will be affected by a disturbance embedded in the northwest flow that is currently entrenched over the western United States. The impact associated with this system is currently being felt on the west side of the Continental Divide where it is already snowing in locations such as Winter Park and Steamboat Springs. However, a strong cold front will sag southward along and east of the Divide late tonight, and northeasterly upslope winds will develop – at least in the lower foothills – allowing for light snow to develop in our area by sunrise.

Overall, this system does not appear to be very impressive and snow accumulations should be light. However, a few models are hinting at the possibility of a heavier band of snow setting up somewhere between Denver and the Front Range Foothills. Colorado will be in the left exit region of a strong upper level jet streak, and this could lead to enhanced snowfall rates somewhere in northeastern Colorado near and along the foothills: 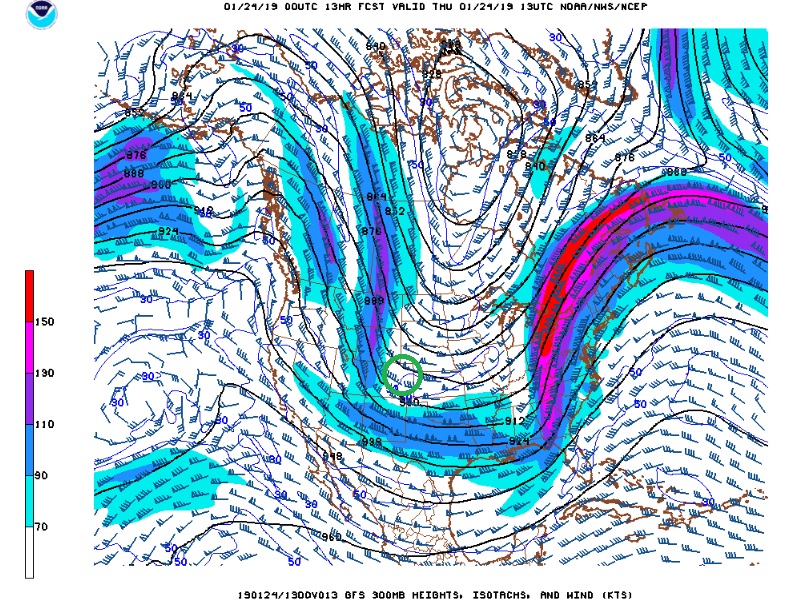 The green circle shows our location relative to the upper level jet streak on Thursday morning. Snow should continue through midday before diminishing in the afternoon.  At this time, I think accumulations around Nederland will be in the 1-2 inch range, but if we do see a band of heavier snow develop accumulations will be higher.

After this storm system, we will get a bit of break through the weekend. Temperatures will remain cold, but the weather should remain dry at least through Sunday.