Thursday was predominantly cloudy but warm in Nederland. Morning lows were around 50 F, but when the sun did manage to break through the clouds during the afternoon, temperatures climbed to around 70 F. This was the warmest day of the year so far and the first time it has reached above 70 F since September 29th, 2019. That was 214 days ago.

We can thank a positive PNA pattern for this unseasonably mild weather. In fact, the current wind and height patterns in the mid levels of the atmosphere show a deep cold trough over the eastern United States with a warm ridge of high pressure over the West: 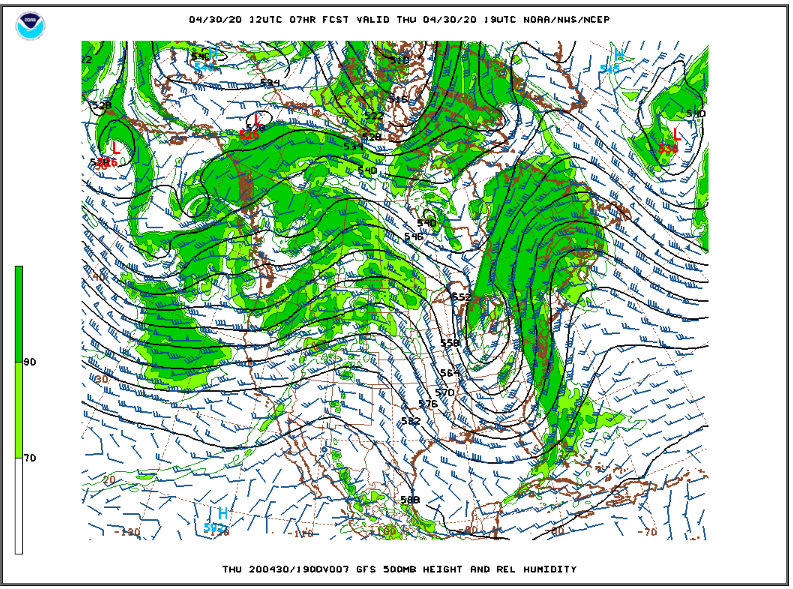 Today was the warmest day of the week.  For the remainder of this week, the ridge will be flattening out and heights will be falling as flow across the United States transitions to a more zonal patterm.  This will result in cooler temperatures. Highs on Friday will only reach into the mid 60s F. Then, a cold front will nudge into Northern Colorado Friday night, and this will produce some upslope fog into Saturday morning. Highs on Saturday will top out somewhere in the 45 to 50 F range – a little below normal for this time of year- and some showers and thunderstorms will be possible with drizzle likely in Boulder and communities near the Foothills.

The cooler air and moisture should be out of here by Sunday when abundant sunshine will return with highs in the low 60s F.

I did a quick check of how our Fall and Winter temperatures have compared to previous years:

Measuring from September 20th to March 20th, this was the second coldest season in my ten years of records.

A Shot of Cold and Snow Heading Towards the Front Range