As advertised, a northern stream shortwave trough in the mid levels of the atmosphere brought a round of clouds as well as rain and snow showers to the Colorado Front Range foothills Saturday evening. As this system approached during the afternoon, clouds thickened over the Continental Divide and the Colorado Northeastern Plains.  Here is a picture of these clouds and associated virga (precipitation which due to the dry atmosphere is not quite reaching the ground): 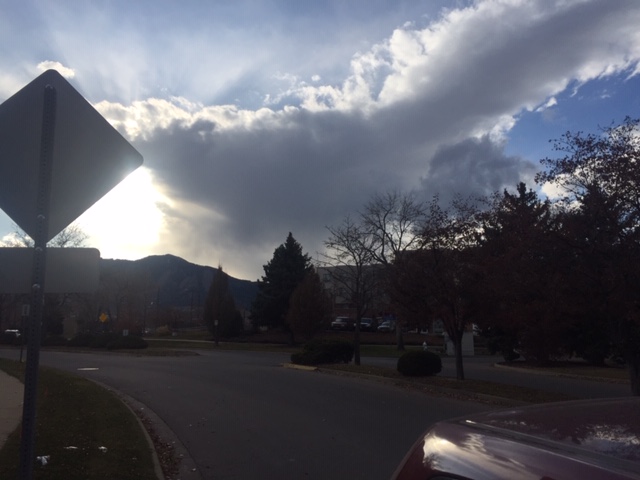 Why do disturbances in the mid levels of our atmosphere cause clouds and precipitation?  You will often hear meteorologists talk about upper level energy or dynamics. Systems like the one that visited the Colorado Front Range Saturday evening have energy (or upper level dynamics) associated with them which often results in rising air, clouds, and if there is enough moisture, precipitation. One measure of atmospheric energy is something called vorticity. It is a fancy term for spin in the atmosphere. Positive vorticity values coincide with cyclonic (counter clockwise in the Northern Hemisphere) spinning air.  This is often a good indicator of areas where there may be clouds and precipitation.  Here is the 500mb vorticity map for Saturday evening. I’ve circled the vorticity maximum at the base of the shortwave trough pushing across Colorado: 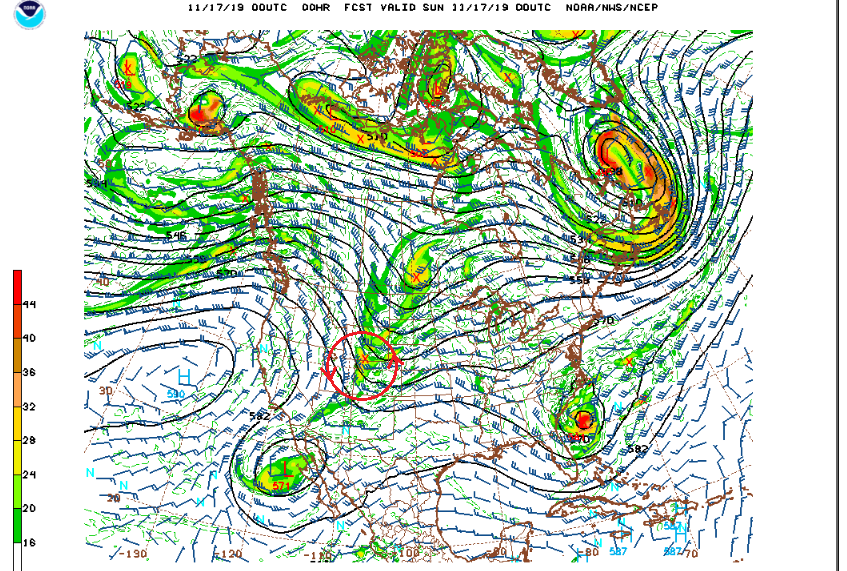 What vorticity is and how it relates to sensible weather quickly gets into the realm of atmospheric dynamics and calculus.  Suffice it to say that positive vorticity often produces the lift and rising air we need to produce rain and snow.

A quick look at the CDOT webcams at 7:30 PM Saturday evening shows snow packed roads, particularly west of the Continental Divide.  Here in Nederland, the snow level set up around 7500 feet this evening, and it is still snowing lightly at our house. So far, we have only received about 0.2 inches of snow.

This system will be a fast mover. By Sunday morning, it will be over the Central Plains. The clouds should decrease, especially east of the Continental Divide. On the west side, I think lingering moisture combined with north northwesterly winds will result in a continued chance of snow showers. The latest model soundings continue to show strong and gusty winds in the higher Foothills and Front Range Mountains Sunday through Monday.  Gusts up to 50 mph will be possible, especially above 10000 feet.

We are still on track for some winter weather and colder temperatures Wednesday afternoon and night. I’ll have more details on this storm system tomorrow. It does not appear to be a big snowstorm – at least for Nederland – but it will remind us that winter is coming.

Winter Settles in over Nederland, Colorado