The big weekend snowstorm left 38.3 inches of snow at our home east of Nederland, Colorado, making it the second biggest snowfall in my records since we moved here in July 2010. Here is how it ranked in my top ten list:

It was also the largest March snowfall I have measured here in Ned.

This storm was interesting in many ways. First, it slowed down considerably, with the steady, heavy snow not really arriving until early Sunday morning.  I woke up to 16 inches of snow on Sunday morning, and at that time it was not snowing at all.  While 16 inches is a decent amount of snowfall, I thought that the forecast of 24-48 inches had busted.  A lot of people – meteorologists included – felt the same way.  Then, the upslope cranked up, and it snowed heavily – 3 to 4 inches per hour at times – and we quickly picked up 22.3 inches more in about 7 hours.

This was an even bigger storm for Denver relative to its records. Denver International Airpot (DIA) reported 27.1 inches of snow, making this the fourth biggest snowstorm there ever! Ever!  This is since weather records began in 1872. That is 139 years. If you were born in 1872 and were still alive today living the whole time in Denver, this would have been the fourth biggest snowfall you would have witnessed in your life (and you would also be very, very old). Big deal? I think it is.

Here is the snowfall analysis from the National Weather Service. Southwestern Boulder County is solidly in the 30-36 inch range. 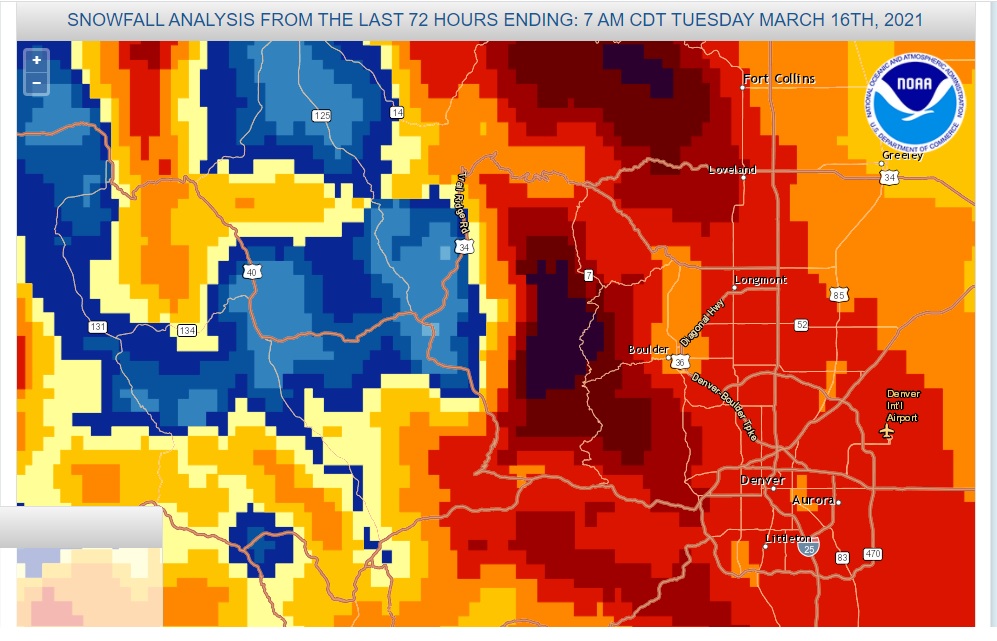 In classic upslope storm fashion, the Winter Park Valley on the west side of the Continental Divide did not do as well with snowfall. Also, notice that much of Denver suburbs saw between 20 to 24 inches of snow.

Looking at the Boulder County CoCoRaHs maps for Sunday and Monday mornings, notice the much lighter accumulations north of Nederland near the Peak to Peak Highway on Sunday: 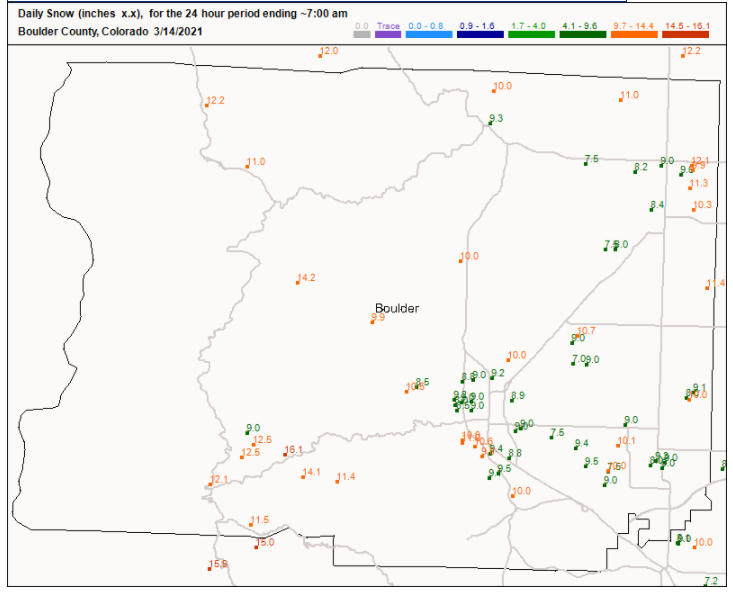 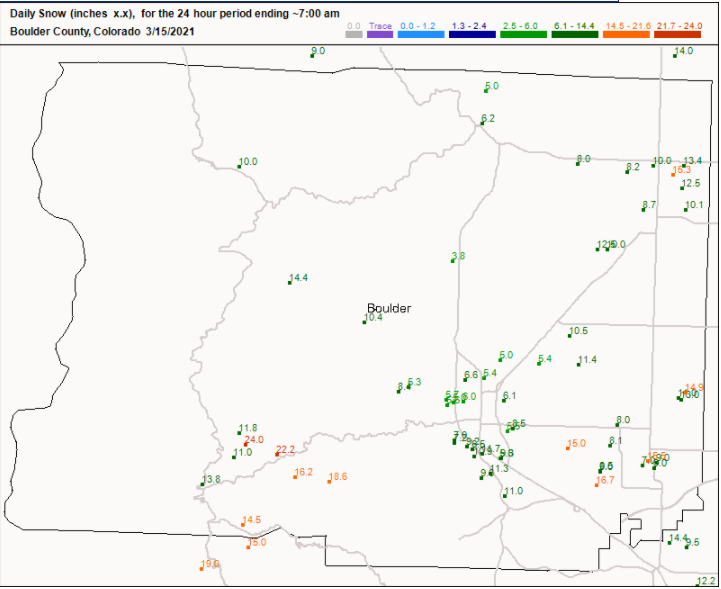 South central Boulder County was in the sweet spot on Sunday.

This was not a drought-buster, but it was accompanied by 2.56 inches of liquid. This will definitely help.  Also, the South Platte River Basin is near normal now for seasonal snow water equivalent: 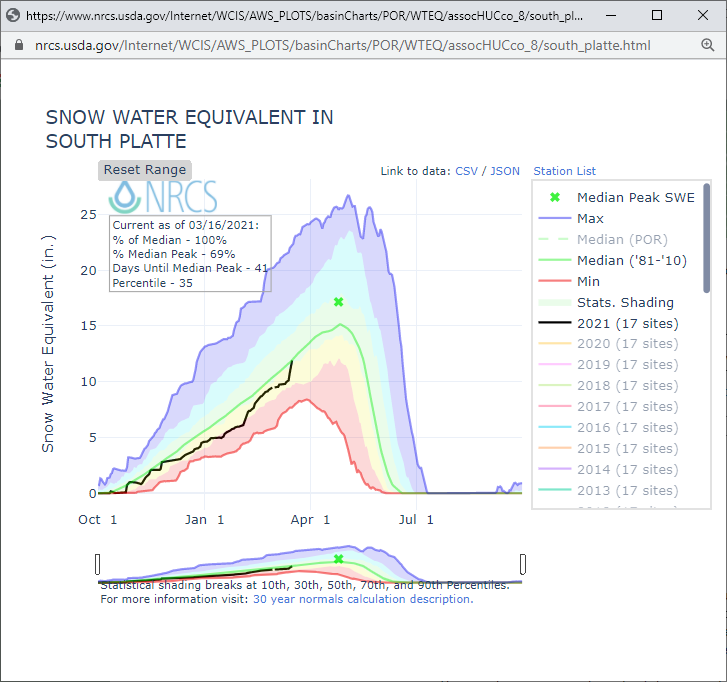 And we still have five weeks to go until we, on average, reach the peak snowpack in this river basin. Not bad for a La Nina winter in the Southern Rockies.

This storm was a good lesson in how large storms often play out.  Even though the first flakes of snow were in the air Saturday morning, the really intense period of snow only lasted about 7 or 8 hours. The rest of the time, we had piddles and drabs of snowfall.

Hopefully by now you are all dug out.  I always feel a little sad when we have a large weather event, because they are relatively rare (once every several years here).

Here is a parting satellite image of our memorable storm: 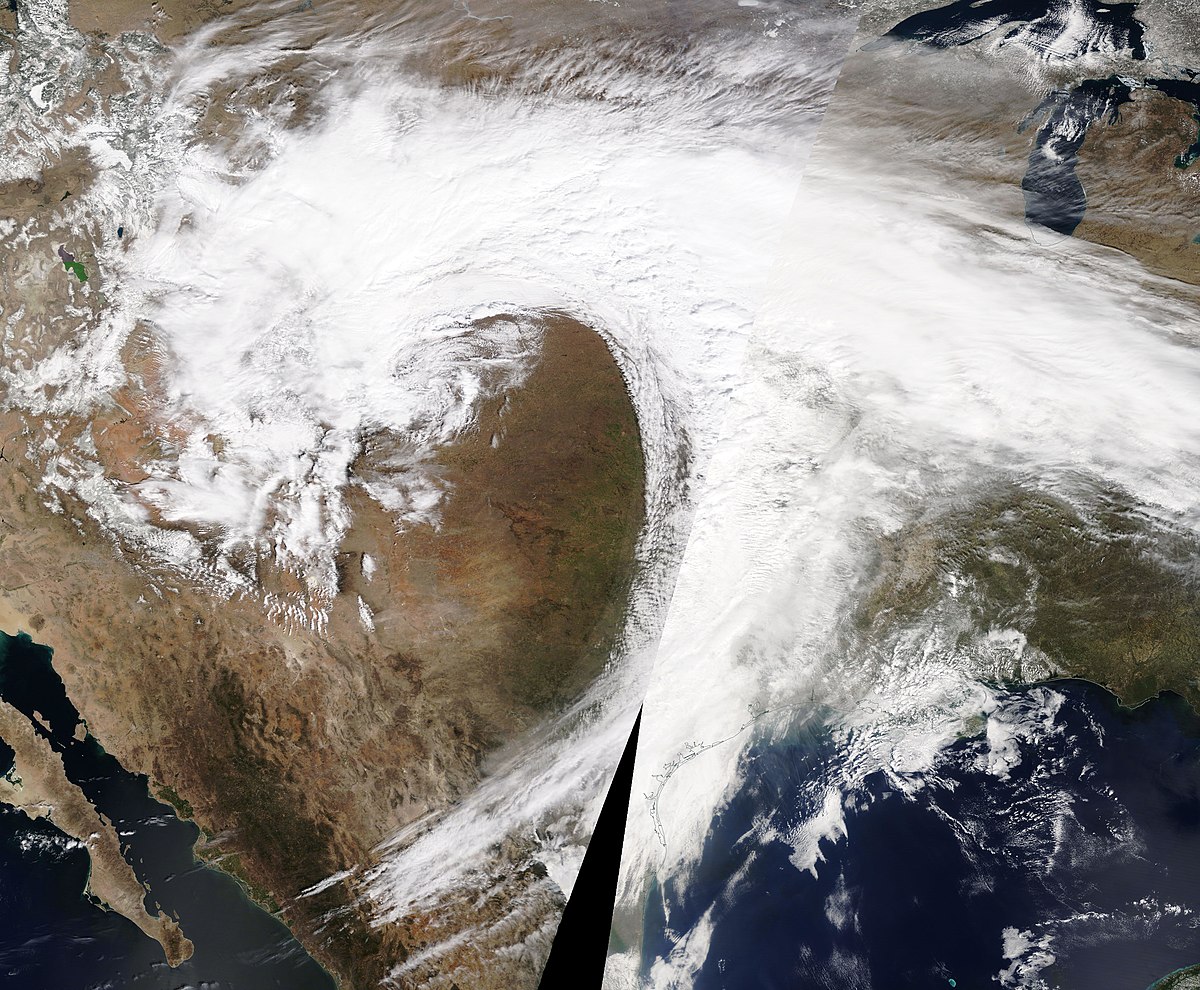 What Weather? The January Doldrums Continue…

A Respite from the Swelter in Ned