The temperature reached 54 F today at our house, and that combined with a nearly cloudless sky made for a spectacular day for us in the Colorado Front Range Foothills. It was a little breezy with peak winds around 35 mph.And this evening we were treated to a spectacular slightly-larger-than-normal moon rise. Even if you are sheltering in place, there is still plenty to be grateful for – particularly that we live in Colorado!

The 500 mb chart tells the story about why it has been unseasonably mild this week:

Nederland and much of Colorado are located under a warm ridge out ahead of a deep upper level storm off of the Southern California coast. The confluence in the upper level winds right over the central Rockies has also resulted in sinking or subsiding air and the relatively cloudless sky we have been enjoying.

The movement of the cutoff low off of the California coast will be the key to our forecast later this week. Deep upper level systems like this one tend to wobble around and can actually move from east to west, something called retrograde motion. Forecast models struggle with them. Eventually this low is expected to weaken and open up into a southern stream trough which will get ejected into the southern United States. Meanwhile a strong short wave will be diving into Rockies on Saturday, bringing much, much colder air to Colorado on Sunday and Monday. The question mark is how – if at all – these two systems will interact. Some models are phasing (or combining them), producing a decent upslope snowstorm here in Nederland on Sunday. Some models are not phasing these two systems, resulting in not much snow but still a lot of cold air.  Both Dark Sky and Weather Underground are hinting at a 6 to 10 inch spring snowstorm. But given that this storm is still 4 to 5 days off and that there is a lot of uncertainty, my inclination is to not play this one up yet. Confidence is low. What is fairly certain is that it is going to get much colder late in the weekend, so enjoy this mild weather while it lasts. 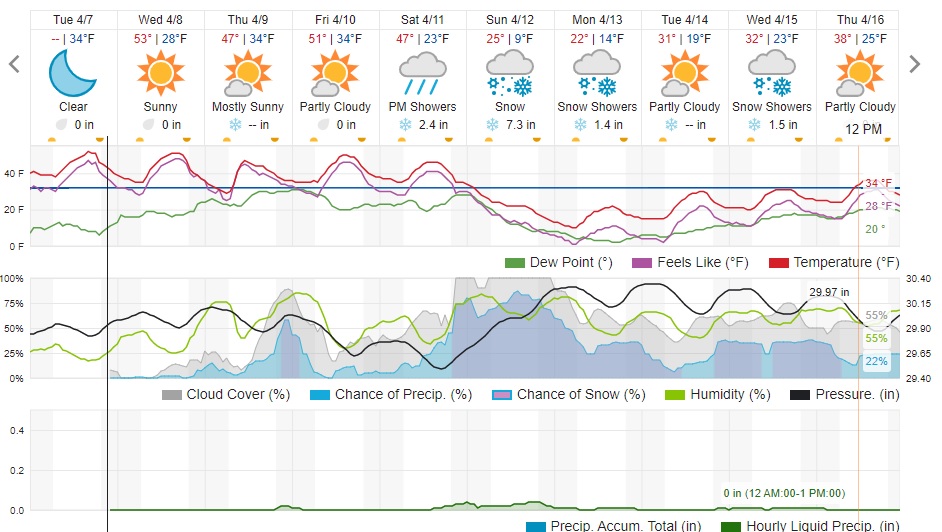 Chillin’ in the Foothills