I was getting a hair cut this evening when my conversation with the barber turned to one about the weather. We were talking about the “crazy” weather this fall with extreme temperature changes and sunny warm days followed by frigid snowstorms. She mentioned that Colorado weather is so bi-polar, and being a Colorado native, she had many years of experience living in a state with some of the most extreme weather. Indeed, our roller coaster weather here in the Colorado Front Range Foothills will continue this weekend in early next week as yet another strong cold front and another round of snow are on schedule to visit Northern Colorado.

First, let’s take a quick look at the snow which fell on Wednesday night and Thursday.  As expected it was a quick moving storm, and the snow was heavy for several hours. However, I underestimated the accumulations. If you look at the CoCoRaHS snowfall reports for Boulder County you’ll notice that a band of heavier snow set up between the Peak to Peak Highway and the city of Boulder: 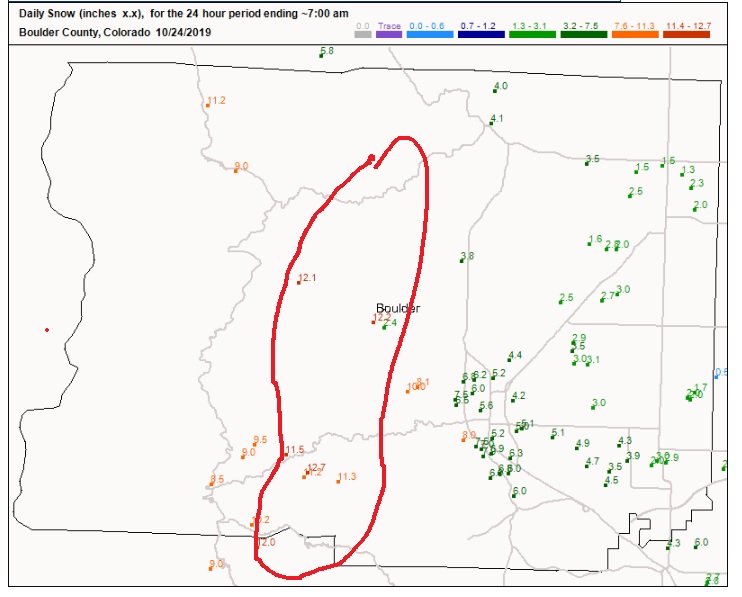 Many locations in this area had around a foot of snow while slightly lighter amounts fell in Nederland and Allenspark. This is a common pattern with upslope snowstorms particularly the colder ones. Often, the band of heaviest snow will set up somewhere between Boulder and the Flatirons and the Peak to Peak Highway. We live about 4 miles as a crow flies east/northeast of Nederland. We received 11.5 inches of snow (0.75 inches of liquid) which is nearly 3 inches more than in town. This difference can be more pronounced, especially in larger storms. It was in the back of my mind that this could happen, and this band of heavier snow is one reason that my forecast of 6 inches busted badly.  Another reason is that storms the past few years have generally under performed for our area and my forecasts tend to include some degree of historical data and past numerical model performance.

Saturday will be the calm before the storm. Temperatures will be on the mild side with highs reaching well into the 50s F. The winds will be blowing especially during the afternoon and evening as the cold front approaches from the north. Enjoy the relatively mild weather because after Saturday, temperatures are expected to remain below freezing at least into the middle of next week.

A disturbance in the upper levels of the atmosphere will be over the Pacific Northwest on Saturday morning: 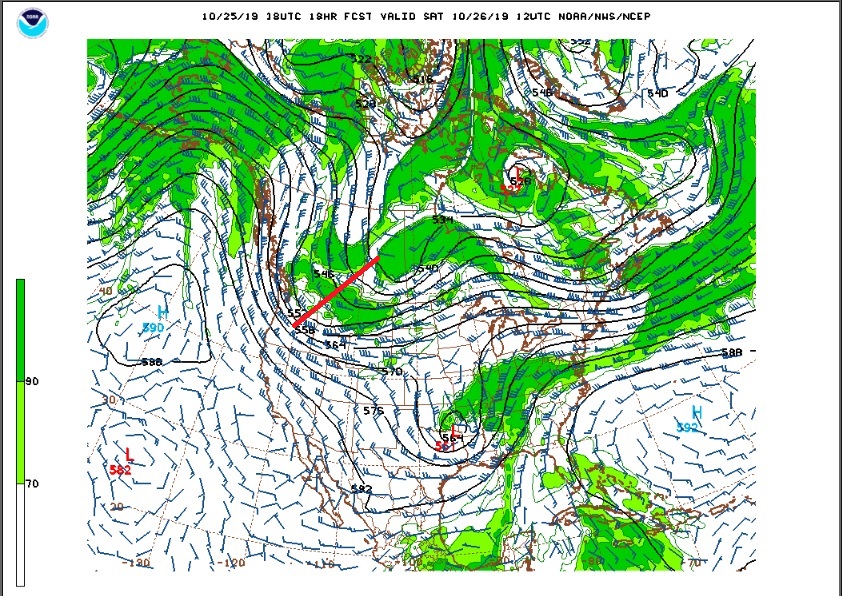 This system will slowly dig into the Great Basin by Sunday morning. A strong cold front associated with this system will pass through Saturday night dramatically cooling temperatures: 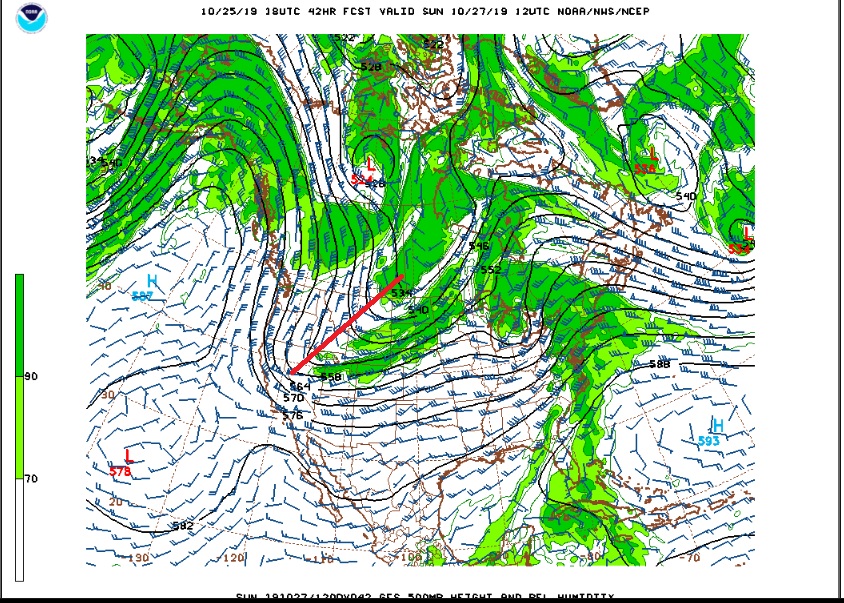 With cold air piling up on the east side of the Continental Divide over eastern Colorado and moisture streaming in from the southwest around the base of this slow moving trough, we are in for a prolonged period of snow beginning Sunday morning and continuing into Monday morning.

The tough part of this forecast is determining when the snow will be heavy and when it will be light or intermittent.  During Sunday afternoon and evening, northeastern Colorado will be under a strong jet stream which will help to enhance snowfall. Also, because of our proximity to the jet stream on Sunday, there will be banding, and the heavier snowfall associated with these bands will help snow pile up quickly.  Temperatures will also be cold on Sunday, around 20 F in Nederland, and atmospheric temperature profiles are favorable for good snow flake growth and high snow ratios.  Fluffier, drier snow accumulates better.

To further complicate the forecast, a second stronger upper level disturbance will swing through Colorado on Tuesday and Wednesday.  Although this system is moving faster, it is packing some energy and could result in another round of heavy snowfall: 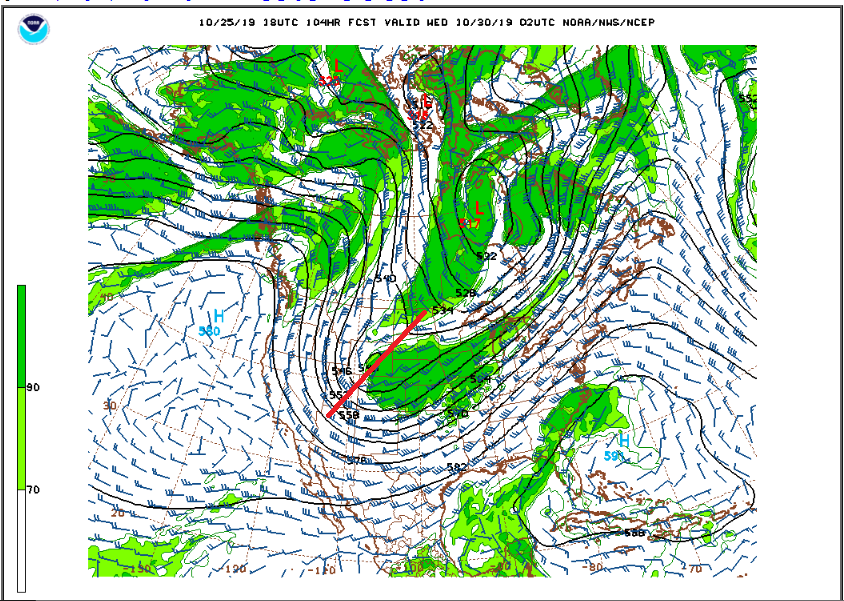 Focusing on the first part of the storm, the official National Weather Service’s snowfall forecast through Monday evening puts Nederland and the surrounding Foothills communities in the 10 to 18 inch range: 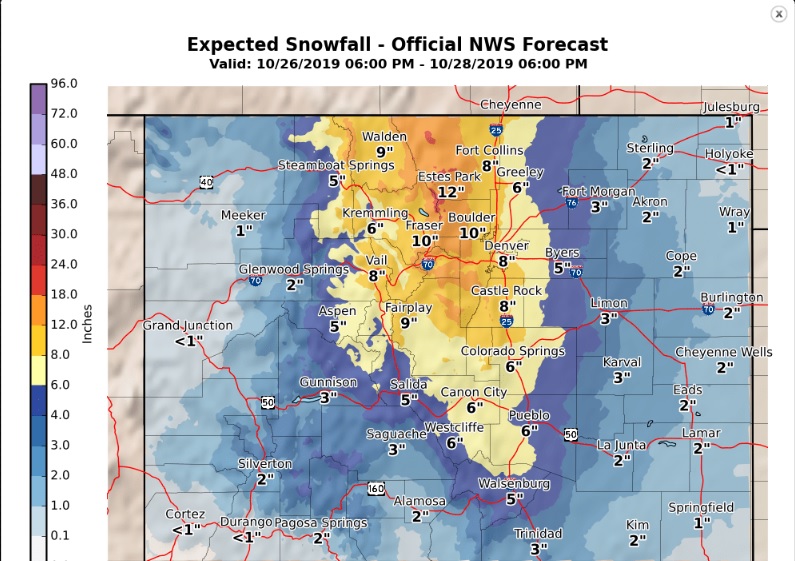 This is slightly more than the Weather Prediction Center’s 50th percentile forecast which is about 12 inches for Nederland: 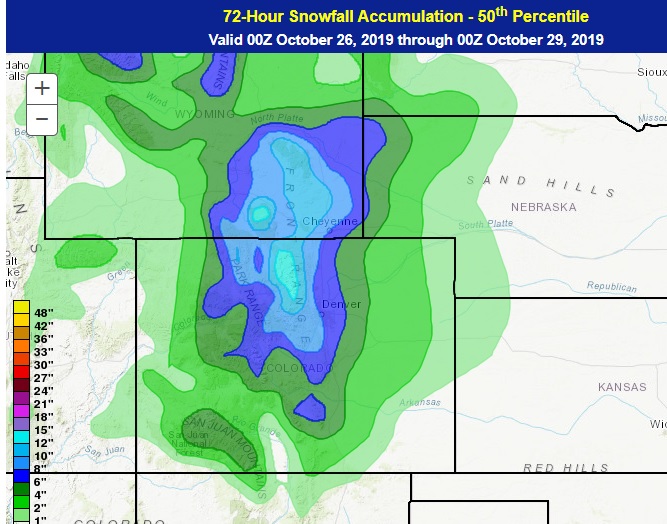 It will also be cold through Tuesday with highs in the 15 – 20F range and lows near 0 F.

In short, this is a complicated forecast with two storm systems bring snow to the area on Sunday into Monday and then again on Tuesday into Wednesday. 8 to 16 inches of snow may fall with the first storm, with another 6+ inches with the second storm.  This is a lot of snow and cold for late October. Those warm summer days are becoming a distant memory.

Another Shot of Cool Air on Tap for Friday

September is Here and So is Fall Weather