Ok. I admit it. I did not expect this storm to produce so much precipitation in Nederland and the surrounding Front Range foothills communities. By the time all was said and done and the storm was winding down late this afternoon, I measured 17.1 inches of snow 16 of which fell between 7 AM and 4 PM. The snow also had a very high water content, by my measurements 1.82 inches of liquid equivalent. Given that, the snow ratio works out to just under 10:1, that is 10 inches of snow per 1 inch of liquid water. That is wet, even for March here in the Colorado Front Range. It took me a few hours to clear our driveway with our snow thrower, partly due to the fact it is over 40 years old, but more importantly, the snow was just that dense.

Many meteorologists, myself included, thought that downsloping would limit snowfall in the foothills. Normally, when you have a strong storm in eastern Colorado, that is exactly what happens. However, this was no ordinary storm. It met and exceeded the definition of a meteorological “bomb”. It also set an “unofficial” all time low pressure record at Pueblo, Colorado, where the pressure dipped down to 975.1 mb – the previous low recorded pressure there was 976.6 mb.  We are talking well over 100 years worth of observations at Pueblo. This may also be the lowest pressure recorded in Colorado weather history. Truly a once in a lifetime storm.

In the end, this storm had so much moisture and dynamic energy, that the northern front range foothills were targeted for many hours by a warm, moist tongue of moisture wrapping around the back side of the storm as it slowly exited into the Plains states. This “tongue” of warm, moist air is sometimes referred to as a TROWAL (Trough of Warm Air Aloft). Because of this, we saw snowfall rates of up to 3 inches per hour at times.

This surface map showing the storm over southeastern Colorado on Wednesday morning is a thing of beauty.  At this point, the storm has an estimated central pressure of 972 mb. The black lines are isobars – lines of equal pressure. The tight packing of isobars around the storm resulted in the exception winds observed on the Plains: 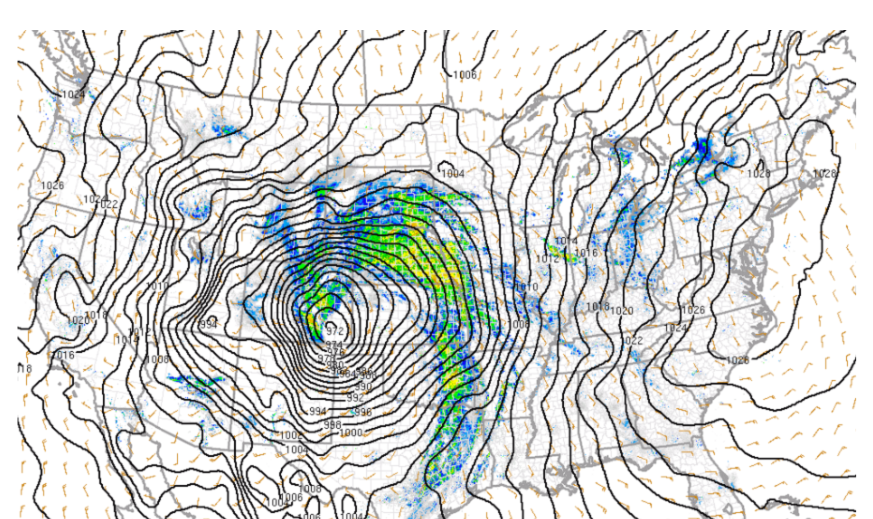 Here is a water vapor satellite image showing the upper level low associated with this storm system. The image clearly shows the mixing or dry and moist air in the mid and upper levels of the atmosphere. The orange areas on the image show a conveyor belt of warm, moist air from the Pacific Ocean and Gulf of Mexico feeding the storm system: 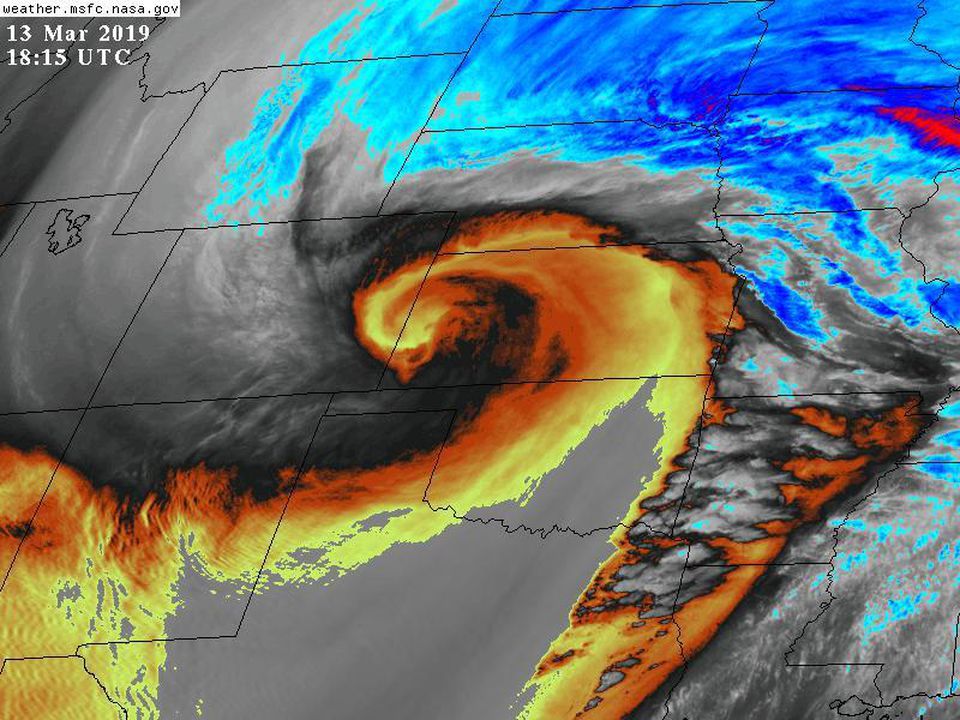 A few things to note:

1) Even though it was a historically strong storm, it was not (by far) the biggest snowstorm we have ever seen in Northeastern Colorado.  Some of our biggest snow storms in Nederland have not been associated with such well organized, deep cyclones. This storm was only the tenth biggest I’ve measured since we moved here in July 2010.

2) Areas at the base of the foothills, including Boulder did experience some downsloping. The rain did not turn over to snow there until later in the morning. Snow amounts were generally in the 3 to 6 inch range in the Boulder Valley.

3) Although snow amounts were much less in Denver and out on the plains, impacts were higher. Winds gusting up to 80 mph (nearly the strength of a category 2 hurricane) combined with falling and blowing snow to produce white out conditions. This snarled traffic and shut down most major roads in northeastern Colorado.

As of now, my records show us at 115.3 inches of snow for the season.  There is plenty of moisture in this snow pack. It will greatly benefit ground water levels later this spring. And April tends to be a very snowy month in Nederland. We’ll see what happens.

Another Mild and Dry Weekend …