Nederland and the surrounding foothills communities hit the snow jackpot with the storm which started Saturday night and continued through early Sunday afternoon. Some of the largest snow amounts were reported in the foothills from Nederland northward to Allenspark. This image, taken from the National Weather Service, shows the highest totals right along and east of the Peak to Peak Highway in the higher foothills: 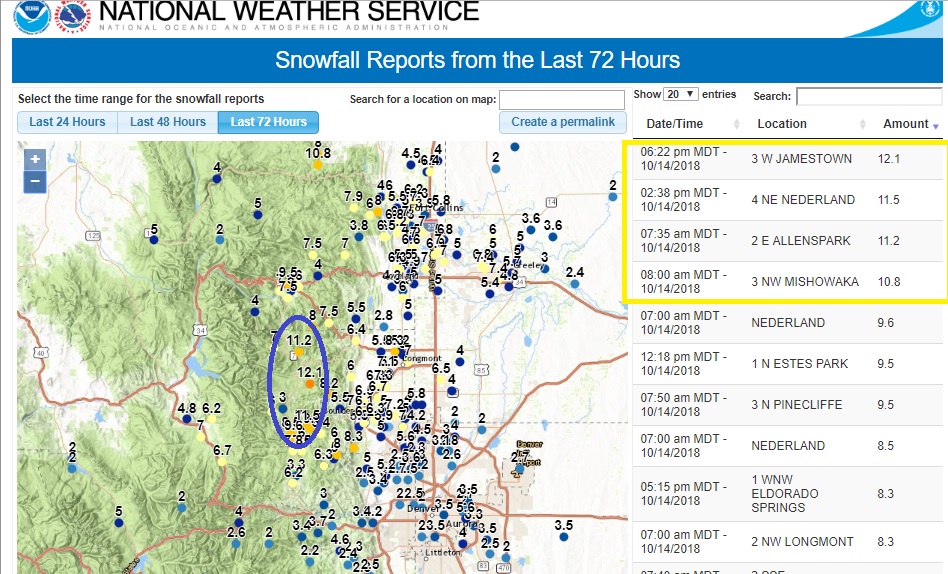 It is common for the heaviest band of upslope snow to set up in the foothills somewhere between the Peak to Peak Highway and the plains. This is where upslope flow combined with dendritic snow growth and upper level forcing is optimal. In this band, the snowfall is intense and the snowflakes are fluffy and accumulate well. Officially at our house, which is about 4 miles east northeast of Nederland, we had 10.7 inches of snow with 0.54 liquid. If you do the math, the overall snow ratio was 20:1, which is about as dry as the snow gets here. When you consider that the first few inches of snow Saturday night were at about a 12:1 ratio, the last 8 inches came out closer to 24:1. That is dry snow for early October.

For the first half of October, we have received 1.68 inches of liquid precipitation and 18 inches of snow.  Normal rainfall for October is 1.5 inches with 9.8 inches of snow. A lot of this moisture is slowly melting into the soil which is helping to replenish the water table. We are still about 5 inches behind normal for precipitation for this time of year, but hopefully we will make up ground this fall.

Temperatures will moderate this week and the snow will quickly melt, but the snow and our low temperatures around 5 F on Monday morning are a reminder that winter is right around the corner.