Saturday and Sunday will offer above normal temperatures and plenty of sunshine for the Colorado Front Range Foothills and the adjacent Northeastern Plains of Colorado. Highs in Nederland should reach well into the 50s F on Saturday and into the low to mid 50s F on Sunday which is between 10 to 15 F above normal for this time of year. However, if you are a skier and this mild weather has you a bit down, don’t despair. You may be tempted to break out your shorts this weekend, but it will be parka weather again by Monday morning.

The forecast models have been consistent in showing a strong cold front passing through northeastern Colorado on Sunday night. The mean pattern (mean as in average) of a warm ridge over the Western United States and a cold trough over the Northeastern United States has left Colorado under a northwesterly wind flow regime.  Storm systems have been passing from northwest to southeast across Colorado dragging their associated cold fronts across the state. Generally, the cold air with these systems has been staying to the east of the Continental Divide resulting in freezing drizzle, fog, and chilly temperatures in locations such as Boulder, Fort Collins, and Denver with milder conditions prevailing in Western Colorado. On these days, if you happened to be driving towards Denver on I-70 over Loveland Pass, you would go from sunshine and mild temperatures in Silverthorne to cold, clouds, and ice in Denver.

The cold front passing through on Sunday night looks to be similar to the one we saw earlier this week. After it’s passage, temperatures by Monday morning will be 30 to 40 degrees F colder in many locations in northeastern Colorado compared to Sunday. There also appears to be another round of freezing drizzle and fog on tap, just enough to make roads, particularly bridges, slick. The cold, upslope flow associated with this front does appear to be somewhat deeper than the front we saw this past Wednesday. This combined with some weak mid atmospheric lift could result in some light snow and flurries. At this time, it looks like locations along and east of the Peak to Peak Highway could see between 1 to 2 inches of snowfall Sunday night into Monday morning. I think the heaviest accumulations will be in the lower Foothills and in Boulder, Golden, Arvada – communities as the base of the foothills.

Sometimes it is all about timing. Even though this is not a big storm, it will ice things up just in time for the Monday morning commute. It is a good thing that Monday is a holiday for many people.

Here is the Weather Underground forecast for Nederland, Colorado, showing the quick show of cold and snow on Sunday night and early Monday Morning. As usual, the cold does not stick around too long: 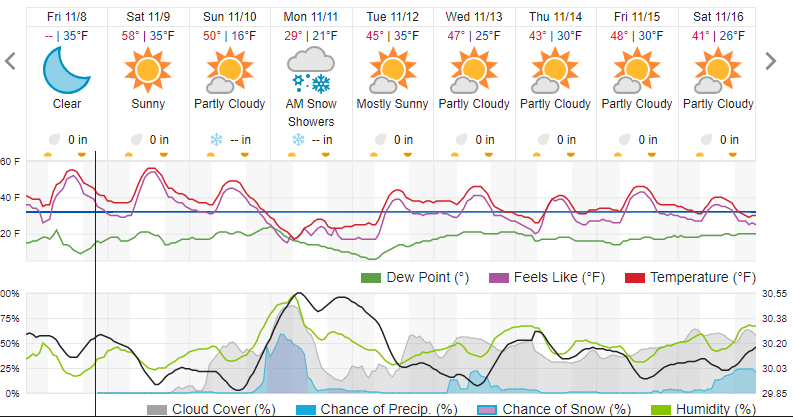 Happy Veterans Day! Thank you to all of the veterans who have served this country.

Cooler Weather is On the Horizon