Clouds and moisture settled over the Front Range mountains and Foothills on Sunday afternoon.  Temperatures were initially in the upper 40s F.  Then, graupel (snow pellets) were followed by a period of snow mixed with rain.  I believe this is the first rain that I have observed since October.  Most of  the precipitation that falls in Nederland during the winter is snow. Rain is rare until you get into March and April. We are now 11 days away from the start of astronomical spring or the vernal equinox. The days are getting noticeably longer and the sun is getting higher in the sky.  In terms of winter-like weather, we are not out of the woods (we have had significant snowfalls into late May). In fact, we are now entering the season (spring) when we see some of our biggest snow storms.

In the near term, upper level energy combined with a storm system over the Eastern Plains of Colorado will result in some light snow tonight into early Monday morning. I do not expect much in the way of accumulation, although some locations may may pick up a slushy inch or so. Once this system exits to our east, we will be in for several days of tranquil weather with slightly above normal temperatures: 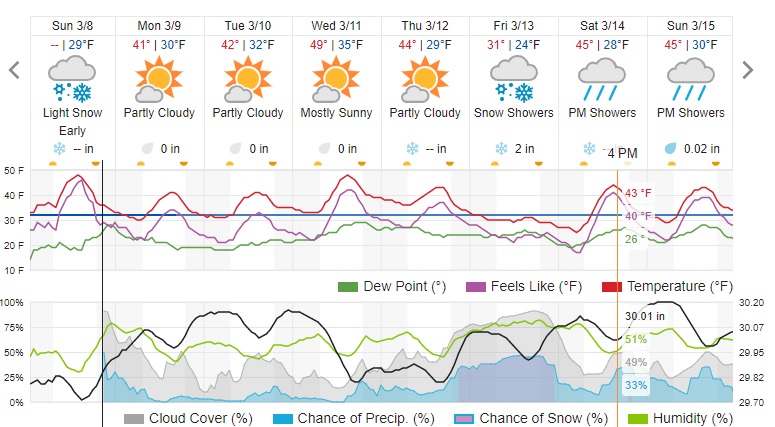 As to what will happen later this week into next week, the computer forecast models are all over the place with their prognostications.  At the moment, it appears that snow could return to our area on Friday, but at this time and moment, accumulations appear to be on the light side.  A quick peak at the Climate Prediction Center’s 8 to 14 day outlook shows a return to colder and wetter weather next week:

We’ll keep an eye on this trend. Spring weather can be fun because the atmosphere is energized and there is still plenty of cold air to make snow. While other parts of the country are planting flowers and enjoying warmer weather, we are sometimes buried by big spring storms.

First 70F Day of the Season in Ned