Everyone who has commuted up and down Boulder Canyon enough has a least a few tales of harrowing, white knuckle drives. Conditions in Boulder Canyon can deteriorate rapidly. If it snows heavily particularly around rush hour, the Canyon, especially in the narrows, can become a skating rink.

Friday evening ended up being one of those drives up Colorado 119 to Nederland that I will remember. I work in Lakewood.  Most of my drive up Colorado 93 to Boulder was dry. Just as I turned on Canyon Drive, it began to snow. My car thermometer registered 34 F, and as I drove up canyon towards the intersection with Sugarloaf and Magnolia Roads, the temperature dropped to freezing. The snow was falling heavily, at least an inch an hour, and a slushy coating of snow had already accumulated on the road.

By the time I reached the narrows, the road was snow covered.   Ice is an interesting substance in that if you put pressure on it between 30-32 F it melts and then instantly refreezes when you release that pressure. With the temperature hovering around 30 F, cars were packing the snow covered road into ice … and people were starting to have trouble getting enough traction to make it up the canyon where the grades approach 10 percent.  Unfortunately, I was behind the Nederland RTD bus, and it did not have chains on. It wasn’t snowing in Boulder. The driver could not have anticipated how quickly road conditions would deteriorate. The bus clawed its way past Boulder Falls but as the road steepened it lost the battle with the icy road and became stuck. There was also a dozen or so cars also stuck on the side of the road. And there was an ambulance that had spun out and crashed into a rock wall on the side of the canyon.

Eventually, I made it around the stuck bus whose passengers had lined up along side of the road with their thumbs out to hitch a ride. I picked up three of them and shuttled them to the Nederland Park and Ride. Here is a picture of the bus on that somewhat adrenaline-filled evening: 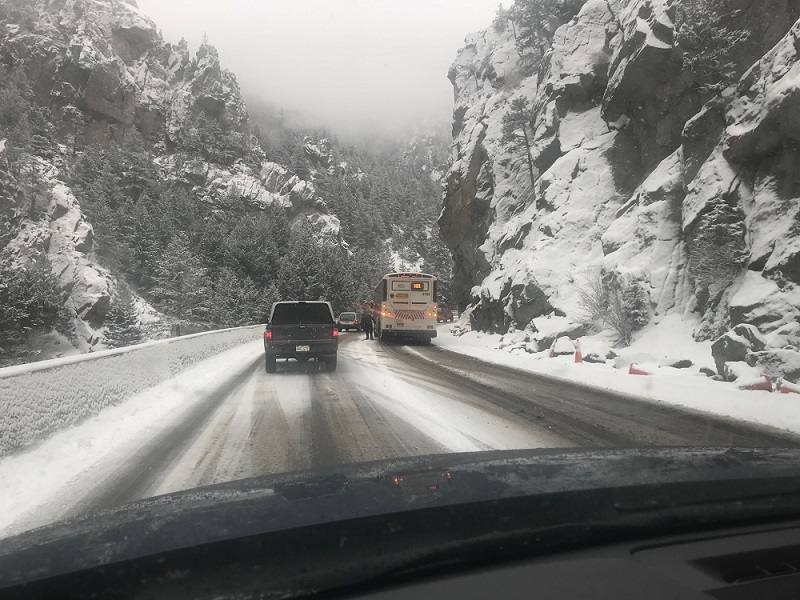 The snow that fell on Friday largely melted on Saturday. The days in mid March are about the same length as those in late September,and the sun is at about the same height in the sky. This means that there is a lot more solar energy, or insolation, to melt snow in March than there is in late December. Also, there was an inversion today. It was one of those days where there was more sun and warmth in Nederland than in Boulder where the day was cold and cloudy. When I was hiking at Brainard Lake, I took this picture of the clouds covering the plains to the east: 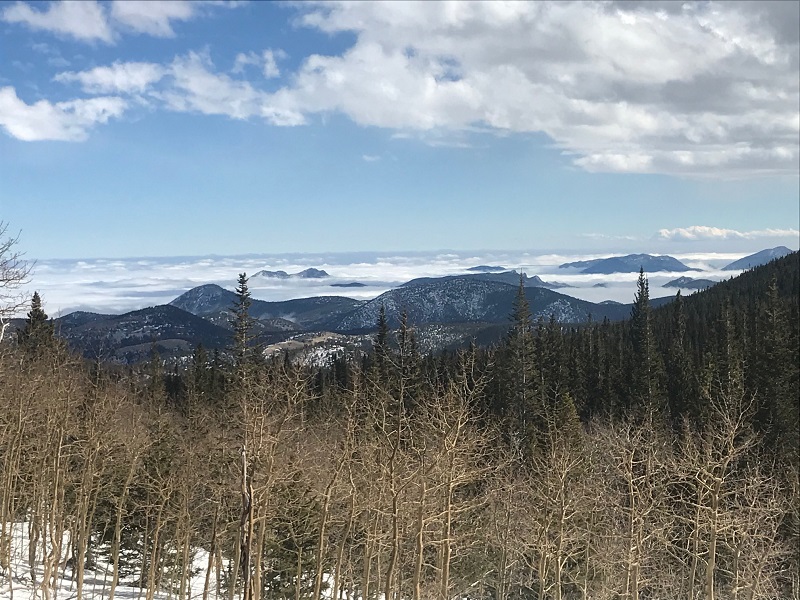 The pleasant weekend weather will continue on Sunday, and the first part of the upcoming week appears to be warm and dry. Enjoy your weekend, and be safe out there!