La Nina has been living up to its name here in Nederland this winter. So far, snowfall has been less than stellar on the east side of the Continental Divide.  Up until today, I have measured 37.3 inches of snow since September 1. Our normal amount through January 2 is 43.5 inches. It is surprising that we are only 6.2 inches behind normal considering that we have not had many large snowfalls this winter so far.  Temperatures have been near normal for the most part. Even though December felt persistently cold, the average temperature for December 2020 – 25.4 F- is precisely our 11 year average. November 2020 was in fact 2.4 F above normal while October 2020 was 4.1 F above normal.

We now head into January which is typically our least snowiest winter month. On average we only receive 13.7 inches of snowfall for the month and snowstorms of more than 9 inches are rare. In my 11 years of weather records for Nederland, the largest January snowfall was 18.1 inches on January 4-5, 2017. The next largest January snowfall was only 9.5 inches on January 12, 2019.

I always like to check how the Snotels are doing.  These automated snowfall and snowpack reporting stations are located between 9000 to 11000 feet near the Continental Divide.  While La Nina winters aren’t normally snowy for us in Ned, sometimes there is enough blow-over snowfall to produce a decent snowpack in the Indian Peaks Wilderness. University Camp at 10300 feet is reporting 4.0 inches of snow water equivalent (SWE) which is only 68% of normal.  Niwot at 9910 feet is reporting 3.0 inches of SWE which is 60% of normal.  Lake Eldora is slightly better at 71% of normal SWE.  Here is a chart of the SWE and precipitation at University Camp so far:

It is still early in the 2020-2021 winter season. This graph shows that on average peak snowpack is not reached at University Camp unil May 1st.

A quick look at the basin averaged SWE in Colorado shows most of the state with below normal snowpack. This is surprising. since Northwestern Colorado tends to do better in La Nina winters: 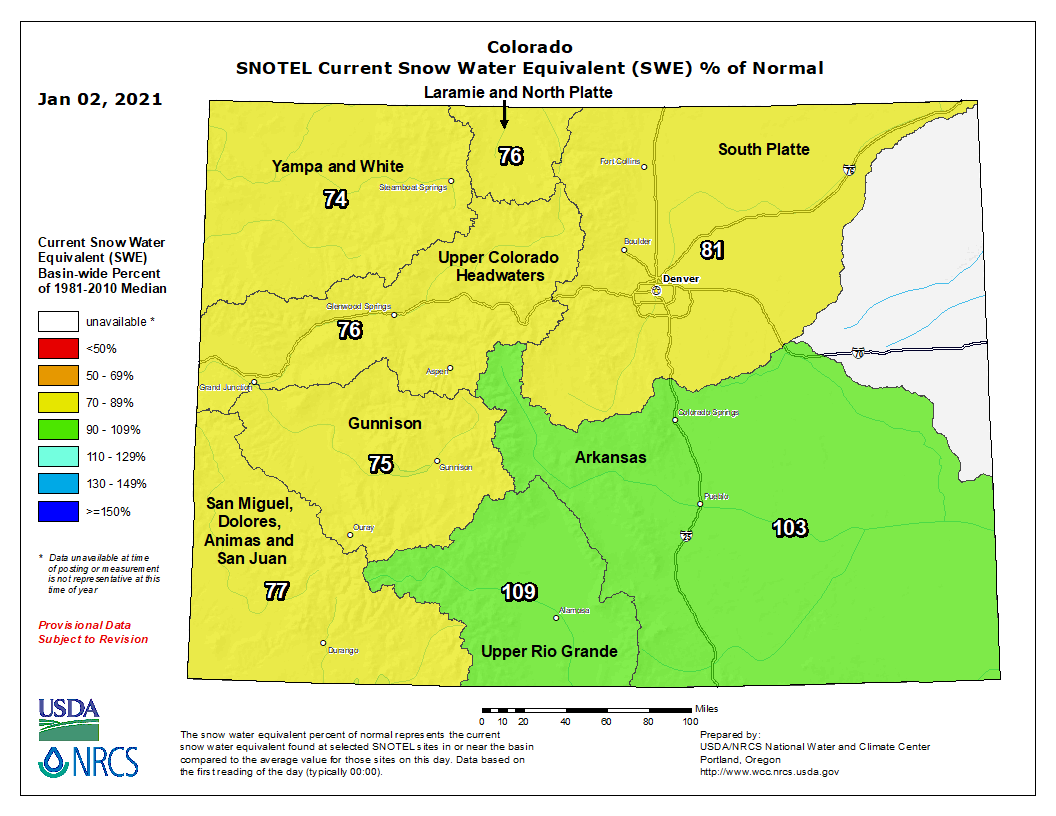 The next weather maker for Northern Colorado will be on Tuesday when a cold front will sweep through the Central and and Southern Rockies. This will usher in colder temperatures for mid week but little in the way of snow.